What a Joke: Rubio Running for Re-Election After All

Just before the filing deadline for the U.S. Senate race, Marco Rubio has decided he wants to be a Senator again after pledging he would not seek re-election. In fact, just last month Rubio tweeted: “I have only said like 10000 times I will be a private citizen in January.” 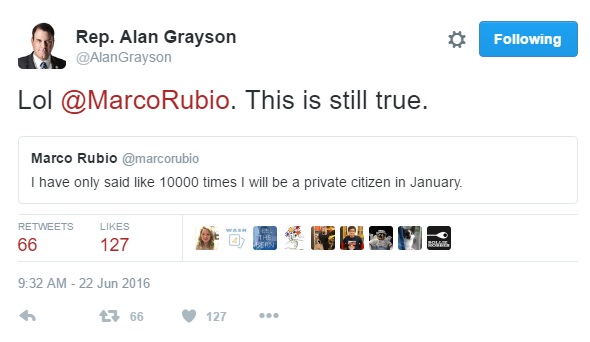 Rubio’s announcement today also signals a major change for someone who couldn’t even show up to cast votes in the Senate. Rubio very well could be considered one of the least effective members of the Senate. On top of that, he admitted he hates it there, so why would voters send him back? “I don’t know that ‘hate’ is the right word,” Rubio told the Washington Post in October. “I’m frustrated.”

Now, with the Senate majority in jeopardy, Rubio is singing a different tune.

Rubio insists the recent Pulse massacre also made him rethink his pledge not to run for re-election, saying the mass shooting “deeply impacted” him. But this week, Rubio voted against legislation that would deny firearms and explosives to suspected terrorists. Rubio also voted against legislation to expand background checks, including at a gun show. Instead of using his position as Senator to take action to help prevent another horrible massacre from happening, Rubio’s votes helped block all gun measures offered in wake of the Orlando mass shooting.

Rubio also understands his blatantly political move to jump back into the Senate race will draw criticism. “I understand my opponents will try to use this decision to score political points against me. Have at it,” Rubio added. “Because I have never claimed to be perfect, or to have all the answers.”

He was right. Grayson could not hold back and it is clear he would love a showdown against Rubio in November.

“‘No Show’ Rubio against the Most Effective Member of Congress. I like that match-up,” Grayson posted on Facebook. “I’ve introduced more bills and passed more amendments in the last three years than any other Member of Congress. And during his past five years, Rubio has passed exactly one bill – a resolution to rename September ‘Spinal Cord Injury Month.'”