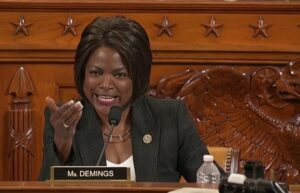 U.S. Representative Val Demings, who is currently running for Senate, released the following statement after Senate Republicans blocked the formation of a bipartisan independent commission to further investigate the January 6th riot at the U.S. Capitol. The bill failed to advance on a vote of 54 to 35, with 60 votes needed. Republican Senators Bill Cassidy, Susan Collins, Lisa Murkowski, Rob Portman, Mitt Romney, and Ben Sasse were the only Republicans who voted for the bill. Here is the full response from Rep. Val Demings to the Senate blocking the January 6th Commission:


“The so-called ‘law and order’ GOP senators blocked investigation of a violent crime. They blocked an independent, bipartisan commission, with equal representation. Its only mission: to find out what went wrong on 1/6, who participated, and how we can protect our democracy.

“They blocked accountability for the attack’s funders and inciters. They turned their backs on the 140 officers who were beaten and bloodied. They shut the door in the faces of the families of the officers who died, who had begged them to support accountability.

“What are they so afraid of? Why are they willing to lie and violate their oaths to cover up this crime? Regardless of political party, we all should want to know the truth and demand nothing less. Why don’t they? The possible answers are troubling.

“Democrats will be relentless in our efforts to find the truth, and we should strongly consider creating a select committee or further empowering existing ones.”