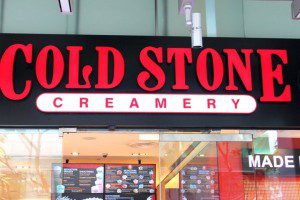 Universal Orlando has opened a new restaurant and will debut a second on Friday, part of its 2014 historic expansion to the entertainment complex.

On Monday, CityWalk Cold Stone Creamery, located on the ground level next to Bubba Gump Shrimp Co. Restaurant and Market, opened its doors selling the popular hand-packed frozen ice cream, along with cakes and smoothies.

And on Friday, Universal CityWalk will unveil a newly designed expanded Starbucks venue, right next to Cold Stone Creamery, serving up coffee with a wide array of pastry selections.

Other restaurants slated to open in 2014 include, Hot Dog Hall of Fame, The Cowfish, Menchie’s and VIVO Italian Kitchen.

During 2014, as part of its epic year for expansion, Universal will also open the destination’s largest hotel, Universal’s Cabana Bay Beach Resort, and The Wizarding World of Harry Potter – Diagon Alley.