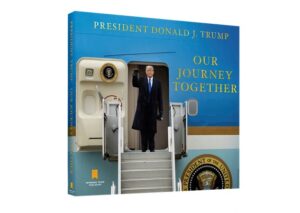 Former President Donald J. Trump is publishing a book in time for the Christmas holiday season, saying it “chronicles the greatness of the last four years with powerful images unlike anything else that has been published.”

The Trump book, Our Journey Together, is a collection of photos captured during his time in the White House. Trump calls it “a must-have for all Patriots,” as every photograph has been handpicked by the 45th President and “every caption is mine, some in my own handwriting.”


Our Journey Together features unforgettable moments from Trump’s time in Washington including: building the Southern Border Wall; cutting America’s taxes; confirming almost 300 federal judges and 3 Supreme Court justices; rebuilding the military; creating Space Force; dealing with Kim Jong-Un, President Xi, President Putin, and many other world leaders; and battling liberals on two “Impeachment Witch Hunts,” along with much more. Trump describes the photographed accomplishments as a “stark contrast to the destruction of our country taking place right now” under President Joe Biden.

Here’s a sample of the captions. “Mark Zuckerberg would come to the White House and kiss my ass. His censorship is terrible for America. His ‘campaign contributions’ even worse!” Another says, “Then-Governor Andrew Cuomo of New York who was forced out of office without, surprisingly, much of a fight. I gave New York everything it wanted, including hospital ships, rooms, thousands of ventilators, and ultimately, vaccines.”

The former President continues to tease supporters that more is coming. “Remember, our journey isn’t over—the best is yet to come,” Trump said.