Trump Talks Return of His Boeing 757 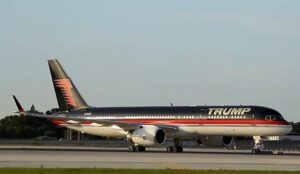 Former President Donald Trump has received a lot of negative press from mainstream media outlets about his Boeing 757. The plane is most recognizable from his campaign rallies before Air Force One stepped in. However, the media continued jabs on the topic even recently. Yet, Trump seems to be sticking it to his critics as he announced the future of the Trump 757.


“Many people have asked about the beautiful Boeing 757 that became so iconic during the Trump rallies,” Trump said. “It was effectively kept in storage in Upstate New York in that I was not allowed to use it during my presidency.”

Of course. It should be obvious a sitting President of the United States would not be allowed to use his personal jet. That’s why Air Force One exists.

“It is now being fully restored and updated and will be put back into service sometime prior to the end of the year,” Trump continued. “It will soon be brought to a Louisiana service facility for the completion of work, inspection and updating of Rolls-Royce engines, and a brand new paint job.”

After the restoration is finished, Trump plans on getting a return on investment.

“When completed, it will be better than ever, and again used at upcoming rallies!” President Trump added.

As recently as March 2021, CNN tried to make an attack out of the Trump 757. CNN reported that the “glory days Trump’s gold-plated 757 seem far away as plane sits idle at a sleepy airport.” This media story was always an odd attempt to attack the former President, but Trump once again redirected the narrative. Now, Trump can use the Boeing 757 as a story line for months to come.