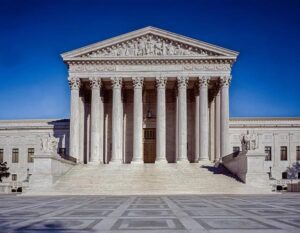 As the country enters the third year of the COVID-19 pandemic, the fate of two key vaccination mandates by President Joe Biden will soon be decided. Supreme Court Justices will hear arguments over the Biden vaccine mandate on January 7th. The two challenges impact nearly 100 million workers in America. One rule impacts employees for larger businesses and another for healthcare workers.


At the heart of the debate, is the President overstepping his authority? The federal government is arguing it has authority to mandate COVID-19 vaccinations because it can regulate safety in workplaces. The two federal policies are a vaccine-or-test mandate for workers at large employers, and a vaccine mandate for health care workers at facilities that receive federal funding. There has been a lot of controversy because the Biden administration is using the Occupational Safety and Health Administration to enforce a vaccine mandate.

“Workers are becoming seriously ill and dying because they are exposed to the virus…on the job – including in widespread and well-documented workplace clusters and outbreaks,” wrote Elizabeth Prelogar, Justice Department Solicitor General, in a court filing ahead of the arguments.

The cases came to the court on an emergency basis. The Supreme Court fast-tracked the two disputes as the Biden administration plans to roll these rules out over this month and next month, so expect a Supreme Court ruling soon.

Lower-court rulings previously blocked the administration from enforcing the healthcare vaccine mandate in approximately half of the states. The justices will hear argument on whether those rulings should remain in place.

The 6th Circuit’s ruling reviving the mandate will remain in force until the Supreme Court rules, although OSHA indicated it will not issue citations until at least January 10th. Republican-led states argue the vaccine mandate exceeds OSHA’s authority.

Recently, a federal judge granted a temporary injunction against a federal vaccine mandate for Navy SEALs, who sued President Biden because they were seeking a religious exemption.

The Supreme Court may finally offer resolution to the ongoing vaccination issues.