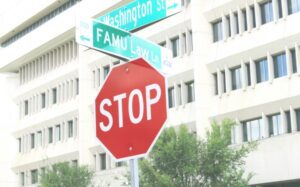 Maynard returned to the College of Law on November 17th, for the renaming of Beggs Avenue to FAMU Law Lane. It’s a project taken on by the 2020 and 2021 FAMU Student Bar Associations.


“So many have labored before us so that you and I could have the opportunity to pursue our dreams,” Maynard told a gathering of faculty, administrators, students, community supporters, sponsors and local elected officials Wednesday. “Therefore, we represent the fruit of a historical movement. And it is our responsibility to continue in the manner established before us and fight to preserve our legacy.”

“It was an honor and privilege to be a small part of such a huge legacy for FAMU College of Law. The rich history of the law school has literally overflowed to the streets of the Parramore community. I am tickled to think the next time I put the law school’s address in my GPS it will direct me to turn right on FAMU Law Lane and announce, you have ARRIVED at your destination,’ said Janvier.

The original address of the College of Law was 201 Beggs Avenue. Thanks to approval of the City of Orlando, the law school is now located at 201 FAMU Law Lane.

The street unveiling ceremony is part of FAMU Law’s 20th anniversary kickoff. The College of Law has been in Orlando since October of 2002.

The FAMU College of Law is located in the heart of downtown Orlando, just steps from the George C. Young United States Courthouse and Federal Building; and blocks from governmental offices, major law firms, large corporations and legal service agencies.