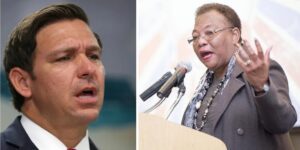 State Representative Geraldine F. Thompson accused Governor Ron DeSantis and his appointee, Secretary of State Laurel Lee, of using government agency attacks against detractors to silence dissent last month. She said the tactics are similar to those of former President Donald J. Trump to his opponents.

An appropriation of $1 million was awarded to the Sankofa Project in 2016 to be shared between 10 African American History organizations throughout Florida. The Department of State, then headed by Ken Detzner, stalled the funding after the Sankofa Project began operations. Detzner required an audit of the entities focused on African American history and the organizations received only a fraction of the total amount of approved funds. In 2019 and 2021, Representative Thompson asked Laurel Lee, the current Secretary of State, to restore the appropriated funds to the organizations.

Though the audit ordered by Detzner showed no misappropriation of funds and was in Lee’s possession, Lee referred the issue to the United States Attorney for the Middle District where she was once employed. Lee also formerly worked for Judge Moody, the father of Florida Attorney General Ashley Moody, and was appointed to a judgeship by former Governor Rick Scott and as Secretary of State by Governor DeSantis. She is married to former Senator Tom Lee.

The FBI reviewed the Sankofa appropriation and the agencies found nothing beyond the original audit results. Representative Thompson maintains that Lee then, of her own volition or at the direction of Ron DeSantis, referred the issue to FDLE, which did not pursue a criminal violation but asked the Commission on Ethics to pursue a conflict-of-interest allegation against Representative Thompson, who was notified of the complaint on June 11, 2021.

“This is beyond the five-year statute of limitations to which the Ethics Commission is bound,” Representative Thompson said. “This is retaliation after the lawsuit I filed and won in 2020 when Governor Ron DeSantis violated the Florida Constitution and acted to unlawfully appoint an unqualified individual to the Florida Supreme Court. This is reprisal and DeSantis is using his appointees and government agencies in an attempt to discredit me and assassinate my character. I am waiting for the Florida Commission on Ethics to show any evidence they have to substantiate this malicious complaint.”