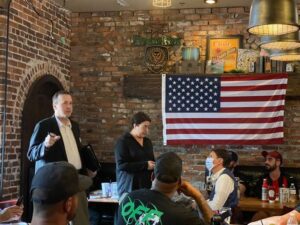 Bill Moore filed the necessary forms to become a candidate for Orlando City Commissioner, District 1 a few weeks ago, and shortly after he did the incumbent City Commissioner Jim Gray filed to run for his potential third term. Candidate qualifying occurs the week of September 13, 2021, and the election will take place on November 2, 2021.

Moore is building support in the business community early in his run. In early August, he spoke to downtown restaurant and bar owners about his campaign, the need for Orlando City Council to provide equitable treatment for all downtown venues. One hot button issue, the highly restrictive ordinance on sound/music, was discussed as negatively impacting their businesses, which in-turn can negatively impact their employees ability to work.

“My opponent voted for a new city ordinance (2021-39) that equates SOUND from restaurants and bars to causing crime in downtown Orlando,” Moore posted. “A conclusion made without a study. A conclusion made, quite possibly, for special interests. A conclusion that was rubber-stamped by Orlando City Commissioner Jim Gray; a self-proclaimed ‘businessman.’”

“What prevents City Council from extending this highly restrictive ‘sound’ ordinance on College Park, Lake Baldwin, Lake Nona, or any other location within the city?” Moore added. “Absolutely nothing. If you are a business owner in the hospitality industry, you need to take note. Your revenues could be in jeopardy in the future. Be like me, support your fellow restaurant and bar owners in downtown Orlando.”

Moore’s priorities include properly allocating public funds in a fiscally responsible manner without raising taxes, improving the safety in our neighborhoods and business corridors, reducing or eliminating burdensome regulations hindering our local businesses, implementing transportation enhancements only after careful analysis and resident input, and limiting development and annexation of land where there is substantial negative impact to residents or on the environment.

“I will not rubber-stamp my approval on an issue just for the sake of not rocking the boat,” candidate Bill Moore stated about his bid against Jim Gray. “One of my biggest priorities will be to make sure public funds are properly spent on projects and disbursed in accordance with vendor contracts. In at least one case, I know this has not been done. We need those funds for maintaining, improving, and keeping our communities safe.”