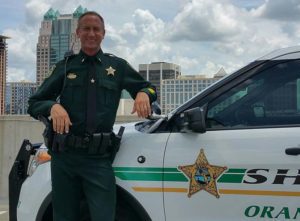 With an impressive, in-depth platform and vision for the Orange County Sheriff’s Office, Lieutenant Spike Hopkins is putting his focus on taking on crime, not politics. Hopkins, who has been aggressively campaigning in communities across the entire county, is quick to say he is “not a politician, but a leader who is a cop.” After his 26 years of service, Hopkins retired in September 2015 to run for Sheriff against incumbent Jerry Demings.

“During my tenure under the current administration, I watched the morale of the agency get to an all-time low and the inability of the sheriff to handle the violent crime, general crime and quality of life issues in Orange County,” Hopkins said. “In addition, when I became a deputy sheriff, my goal was to ‘save the world.’ I worked very hard my almost 30 years of service only to see the county was only getting worse.”

“Demings is too busy being a politician,” he added. “The lack of leadership and disconnect puts public safety in jeopardy.”

Hopkins’ top priorities include filling 110 deputy sheriff vacancies and permanently re-assigning 40 deputies into the Patrol Division to handle crime where it is occurring, on the streets. He will also create a quick response squad of 25 deputies to handle any new crime trends before they become large. He also wants to fill the 13 vacant undercover narcotic agent positions immediately in order to target the drug dealers and address the ongoing local heroin epidemic.

Hopkins also wants to re-establish community-oriented policing. “My plan will permanently assign deputies to your neighborhoods,” he said, differing from current OCSO policy which rotates patrol deputies every two weeks. “Not only will this give them a sense of ‘ownership,’ it will allow your community to know their deputies and the deputy will know the residents and rhythm of their community.”

Using his years of experience ranging from a patrol deputy, SWAT team member, Night Watch Commander and even Deputy of the Year among many other positions, Hopkins identifies the low morale at the Sheriff’s Office and unfilled deputy vacancies as big red flags that must be addressed. “I personally have seen the morale of the Orange County Sheriff’s Office sworn deputies and civilian employees decline to the lowest level ever,” Hopkins said. “The morale will dramatically improve on day one when I’m the sheriff.”

Hopkins pointed out two main reasons for the low morale. First, Sheriff Demings went many years without any pay raises for the employees and according to deputies, health insurance costs increased offsetting the small raises that eventually did come. Hopkins also notes that a 15-year deputy sheriff in Orange County makes $47,000 a year, yet a 10-year Orlando police officer makes $74,000 a year. “Same job, same city, big difference,” Hopkins said. But money is not the primary reason for the morale problems.

“Deputies want a sheriff who will lead, coach, motivate and know how to be a law enforcement officer,” he said. “Demings has no concern for morale of his employees. For the last 25 years, his police work has been done from behind a desk. His elitist attitude alienates him from his employees. The low morale is shown by the deputies abandoning ship.”

Since January 2015, about 13 deputies leave the OCSO each month. The majority of these deputies leave for other law enforcement jobs, not retirement. There are also more than 100 unfilled deputy sheriff vacancies and local patrol deputies are forced to go from call to call during their shifts. The high call load and low amount of deputies available creates added stress, Hopkins points out. “I know first-hand these deputies being overworked and underappreciated has a direct correlation on how they treat the public.”

In addition to putting forward an in-depth recruitment plan to fill the vacancies as quickly as possible, Spike Hopkins is not going to change who is even if elected Sheriff. He says he is ready to lead by example, something the incumbent is not doing. Hopkins has pledged to go on duty every Friday evening. “I will be out on patrol working side by side with the hard-working men and women of the agency,” he said. “This shows the troops though I’m the leader I still can do police work. This will motivate the deputies to work harder when their leader is responding to calls for service, conducting traffic stops and arresting suspects. This interaction with deputies at all levels will keep me in tune with their issues, concerns and ideas to make their job more efficient. I don’t want my deputies to be intimidated by me but know I can do the job I ask them to do.”

“I want the public to see me out doing what they pay me to do,” Hopkins added. “This patrolling makes me more accessible to the public. I believe when I respond to their 911 call, they will see I’m actually concerned about their safety.”

Even as Night Watch Commander, Hopkins did not work from an office when there were not administrative or operational duties needed. “I never forgot I was a cop first,” he said. “This lead from the front and by example style motivates the employees. They respected me for the deputy sheriff I was, not just because I wore rank emblems on my collar. I believe if I’m going to make decisions on how our deputies are going to do their job, I know how to do the job.”

Hopkins has a plan to increase school safety, funding programs like Hero 911 to help reduce law enforcement’s response time and to help save lives while stopping active shooters. He also wants to implement Shot Spotter to quickly locate where gunshots originate. Both programs would be funded using forfeited drug dealer money. Hopkins says Demings currently uses these available funds for private security instead of public safety measures like the programs he is proposing. “Why isn’t Demings tapping available resources to protect our kids?” Hopkins asked.

In a shift from the typical narrative from local law enforcement leadership, Hopkins is a big supporter of body cameras and transparency. He pledged to use the technology to hold his office accountable and he stated he would support making body camera videos available to the public and media immediately. He understands the need to repair community relations and has proposed business cards including badge numbers for deputies as well as a public app for residents to rate deputy attitudes and interactions.

“We’ve got to right the wrong if it ever happens,” Hopkins said. “We should be the good guys no matter what happens. That attitude has to start from the top.”

Spike Hopkins spent his entire law enforcement career with the Orange County Sheriff’s Office. His wife has also been a local police officer for 14 years and she is currently in her 10th year with the Orlando Police Department. The two have a six-year old son, Quintin. He is campaigning on a platform he says he developed using his years of experience as well as his personal and professional relationships.

“I’m the only candidate who actually has a plan to reduce crime and make Orange County safer,” Hopkins said. “My goal is to lead the OCSO in reducing crime and improving the quality of life in Orange County. Jerry has had almost 8 years to do this but has not been able to. Under his command he has experienced 425 homicides and over 100,000 burglaries.”

If elected, Spike for Sheriff promises business owners and residents will see an immediate increase of deputies patrolling. He says all deputies will be trained in community-oriented policing to form a partnership in reducing crime  and deputies’ attitudes will change to a more positive, helpful one.