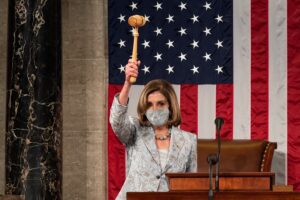 Criticism of China continues to increase as Speaker of the House of Representatives Nancy Pelosi called for a diplomatic boycott of the Beijing Olympics in 2022. Speaker Pelosi even said world leaders who attend would lose their moral authority. Her criticism focused on China’s human rights violations, specifically against the Uyghur population, and not the coronavirus origins.


“Let’s not honour the Chinese government by having heads of state go to China,” Speaker Pelosi said during a bipartisan congressional hearing last week. “For heads of state to go to China in light of a genocide that is ongoing – while you’re sitting there in your seat – really begs the question, what moral authority do you have to speak again about human rights any place in the world?”

Of course, China was not pleased with the comments and called on Pelosi and other politicians to stop playing “despicable political games” using the Beijing Olympics. “Some US individuals’ remarks are full of lies and disinformation,” one spokesperson for the Chinese foreign ministry added in response to Pelosi’s comments.

The push for at least a diplomatic boycott of the Beijing Olympics is a rare bipartisan issue in Congress. Now, with the Speaker of the House joining the chorus, pressure will continue on President Joe Biden. For now, Biden’s administration has not backed a boycott at all.

While most of the growing calls are for a diplomatic boycott, there is not an aggressive push to prevent athletes from competing currently outside of human rights groups. Some political leaders are also calling on the Olympic games to be relocated.

Olympic competitors are nervous about calls for boycotts, and are against bringing politics into sports. “Past Olympic boycotts have failed to achieve political ends – and they should give all of us pause in considering another boycott,” said Sarah Hirshland, the chief executive officer of the US Olympic and Paralympic Committee in response to the congressional hearing.