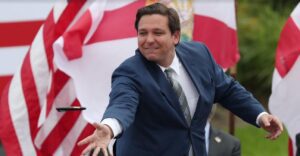 There has been a clear and sweeping craze regarding Governor DeSantis, inspiring both rallying cries for his advancement to the White House as well as visceral attacks on policies and executive actions he’s taken. With so much attention garnered from around the country, it now leaves many Floridians debating whether they would rather have Ron DeSantis as their Governor or their President.


After 2020, a tiring and tough year for legislation, Gov. DeSantis boasted strong approval numbers with 55% of voters approving, and 40% disapproving of the work he’s accomplished thus far. Furthermore, the Florida Governor has been under nonstop scrutiny in the mainstream media in regards to his executive orders and policies in regards to COVID-19. But how do the locals feel about his decisions? While it remains a largely partisan issue, DeSantis made it out with a 70% approval rating on his handling of the vaccine distribution; with a mere 26% saying he handled it poorly.

Brave is an understatement for Democrats to step into the ring with Gov. DeSantis, braver are the approaches and strategies they are bringing forth. Charlie Crist is shaping up to be the main contender on behalf of the Democrats, talking about his priorities and quoted as saying civil rights are at the top of that to-do list. “Peaceful protestors, women and their right to choose, and the LGBTQ community, and we will expand Medicaid, making affordable healthcare a human right,” he said. A shocking approach considering Florida has voted Red, and at the very least remained Center Right since 1999.

“What party is he gonna run in this time? He lost as a Republican, an Independent, a Democrat, but then I looked up he has voted this congress with Nancy Pelosi 100% of the time, so he could probably even give it a run with the Green Party even,” DeSantis said.

The plot is this: use the 2022 gubernatorial election as a chance to cut the DeSantis surge as he paves his way to the 2024 presidential race. Ironically, the very same strategy that took out Charlie Crist in the past, as DeSantis has eluded to. “It is always easier to stop someone’s rise sooner rather than later,” said David Turner, spokesman for the Democratic Governors Association. “You don’t lose your race for governor and then run for president.”

While it seems Democrats are hopeful, more about a DeSantis presidency will likely be on the forefront of people’s minds and dialogue, which may be very telling of the Republican Party’s future.

Florida will be home to two high-profile statewide midterm races in 2022: DeSantis’ reelection bid and a Senate contest in which Florida Senator Marco Rubio will be up for reelection.