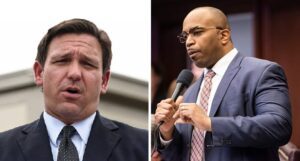 State Senator Bobby Powell, as Chairman and on behalf of the Florida Legislative Black Caucus, called on Governor Ron DeSantis to apologize for his “unacceptable remarks” supporting podcast host Joe Rogan’s use of racist slurs, as well as what Powell calls the Governor’s encouragement of Rogan to continue such behavior.

“Governor DeSantis said: ‘Don’t give an inch. Do not apologize. Do not kowtow to the mob. Stand up and tell them to pound sand,'” said Senator Powell. “It is Governor DeSantis who now owes the apology. People throughout Florida and our nation outraged over the ignorant use of racist slurs by a man in a position of great influence are not a mob lusting for blood. They are a collection of individuals demanding human dignity and respect – something our Governor will not, or cannot understand.”

Florida Democrats and the Black Caucus are trying to brand the remarks by Gov. DeSantis as “highly inflammatory” and say they are the latest salvo from the governor in a long line of attacks against minorities in Florida. Democrats are saying Gov. DeSantis made his remarks to ignite culture wars as part of a political strategy, and one they say he wants to use to ultimately run for the White House. According to Democratic critics, Republican Gov. DeSantis said Rogan “shouldn’t have apologized” for repeatedly using a racist slur and making other controversial comments on some of his podcast shows.

“From the beginning, his tendency has been catering to his ultra conservative base by tearing down and tearing into the rich diversity of Florida, eroding the freedoms every one of us is entitled to as Americans,” added Senator Powell. “He has attacked his first amendment rights, voting rights, the teaching of Black history, LGBTQ identity, and Hispanic and Black Congressional representation. Yet he protects his own spokeswoman’s shielding of neo-Nazis, and now the use of a dehumanizing slur rooted in slavery. Every one of these tactics is entrenched in the disparagement and oppression of those who don’t look like him, don’t act like him and certainly don’t think like him. This isn’t a governor of and for the people. This is a governor who views the people as the enemy.”