A Senate Republican report examines the influence that woke financial corporations who push left-leaning policies have on their corporate shareholders. 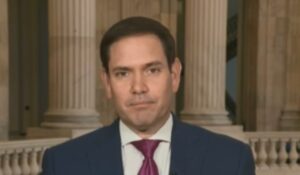 “Woke finance is a cancer on our free-market economy,” said Senator Rubio. “These are often nationless corporations that amass fortunes divorced from the fate of our great country while pushing socially destructive, far left policies like boycotts and cancel crusades at home. We need to empower patriotic Americans who actually love their country to fight back against the growing tyranny of the woke elites running corporate America.”

Rubio’s Mind Your Own Business Act would require corporate directors to prove their “woke” corporate actions were in their shareholders’ best interest in order to avoid liability for breach of fiduciary duty in shareholder litigation over corporate actions relating to certain social policies. It would also incentivize corporate management to stop abusing their positions to advance left-wing social policies by increasing their personal liability to shareholders for breaches of fiduciary duty resulting from those policies.

Senator Rubio’s Mind Your Own Business Act is a private-sector solution to the problem of woke corporations. Specifically the bill: