President Joe Biden signed The Medical Marijuana and Cannabidiol Research Expansion Act into law. The legislation facilitates the federal approval of cannabis-specific clinical research and drug development. Activists are celebrating because it is the first time in over 50 years that a President has signed a stand-alone piece of legislation loosening federal marijuana prohibitions. 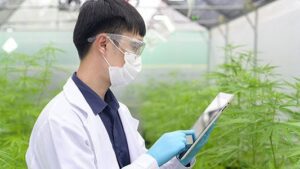 Under the Medical Marijuana and Cannabidiol Research Expansion Act, the U.S. Attorney General is provided with a 60-day timeline to either approve or deny applications from scientists wishing to conduct clinical trials involving the use of cannabis by human subjects. However, protocols must first be reviewed and approved by both the Secretary of the U.S. Department of Health and Human Services and by the National Institutes of Health prior to the AG’s authorization. Those agencies do not have an explicit timeline with which to complete their reviews.

The law also mandates the Attorney General to solicit applications from those seeking to grow cannabis for either research purposes or for purposes of potential drug development, and it provides a timeline for the AG to approve those applicants. It also calls upon federal agencies, including HHS, to provide a report on the “potential therapeutic effects of cannabidiol or marijuana on serious medical conditions.”

Under current regulations, the U.S. Drug Enforcement Administration is primarily tasked with reviewing and licensing marijuana cultivators, as well as granting Schedule I licenses to scientists wishing to study cannabis in clinical settings. In 2016, the agency announced that it would expand the pool of federally licensed growers beyond just the University of Mississippi (which was initially granted a federal cannabis cultivation license in 1968). In May 2021, the agency announced that it had reached agreements with a handful of third-party applicants to allow them to grow cannabis for use in federally approved clinical trials, but progress towards these official partnerships has been slow to materialize.

For decades, scientists wishing to work with marijuana have complained that it often takes years before their research protocols are approved by federal agencies, and that the quality of cannabis provided by the University of Mississippi’s cultivation program is of inferior quality and is not representative of the products available in state-legal markets.


In response to those complaints, House members earlier this year passed legislation, HR 5657: The Medical Marijuana Research Act, permitting authorized scientists for the first time to access cannabis flowers and other products manufactured in accordance with state-approved marijuana programs. However, those explicit provisions were not included in The Medical Marijuana and Cannabidiol Research Expansion Act.

“While the Expansion Act is a step in the right direction, the limited variety of cannabis cultivars accessible to federally licensed researchers does not represent the type or quality of cannabis products currently available in legal, statewide markets,” NORML’s Deputy Director Paul Armentano said. “The fact that nearly one-half of US adults have legal access to these multitude of cannabis products, but our nation’s top scientists do not, is the height of absurdity and highlights the need for continued legislative action if we want to more easily study the state-legal products that millions of Americans are actually using.”

“While the significance of POTUS signing the first stand-alone cannabis policy reform bill should not be overlooked, in truth, we don’t need more research to know definitively that prohibition is a misguided and disastrous policy,” NORML’s Political Director Morgan Fox said. “That said, this legislation is certainly a step in the right direction that shows there can be bipartisan cooperation on this issue. We commend Senate Majority Leader Schumer for prioritizing cannabis policy, and we remain hopeful for the passage of even more substantial legislation before the end of the current session.”