Increasingly confident shoppers and more sophisticated inventory control will combine to make the upcoming holiday season more joyous for Florida retailers who will fare better than their counterparts across the country, the head of the Florida Retail Federation (FRF) said Monday. 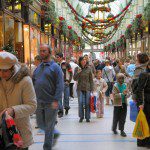 Federation President and CEO Rick McAllister, who proved skeptics wrong last year by successfully predicting a rosier picture than most observers, said retailers could see gains of up to 4 percent for the holiday season versus last year compared to a 2.3 percent year-to-year boost predicted nationally.

Despite persistently high unemployment rates, McAllister said other factors have shown positive turns as consumers grow weary of belt tightening and are feeling more secure in their own financial situation.

“During the recession, Americans and Floridians began to reduce their debt and increase their savings which did damage to consumer spending,” McAllister said. “But what that has done for them now is that they are feeling economically healthier …. and are willing spend more than they did the last couple years.”

Last year, McAllister bucked most retail watchers by predicting modest growth in Florida sales of about 2 percent, a prediction that turned out to be true despite other dire predictions.

“Consumer confidence drives retail sales,” McAllister said. “And the most recent University of Florida confidence survey proves that out, showing confidence levels higher than they have been the past few years.”

The National Retail Federation said last month that it expects holiday sales nationally to increase 2.3 percent this year to $447.1 billion, slightly below the average of 2.5 percent a year over the last decade. Last year, national retail sales only ticked up 0.4 percent from 2008, and that year things were absolutely dismal with a 3.9 percent holiday sales decline, nationally, from 2007.

While things are looking up, national forecasters are slightly less bullish than their Florida counterparts.

“Though the retail industry is on stronger footing than last year, companies are closely watching key economic indicators like employment and consumer confidence before getting too optimistic that the recession is behind them,” NRF President and CEO Matthew Shay said last month.

Ken DeHart, manager of a JCPenny store in Tallahassee said he’s increased seasonal hiring by 20 percent over last year. At nearby Best Buy, store manager Ellis Hanks said his holiday hires are also up significantly in anticipation of more shoppers.

“We hired for the holiday last year (too), but we are optimistic of a very strong season,” DeHart said.

McAllister said consumers will see higher priced items in stores as merchants offer consumers more expensive items than have been offered the past few years. Jewelry sales are expected to post gains of more than 15 percent over last year while pricier toys are also expected to leave the shelves in greater numbers.

Internet sales will continue to cut into brick and mortar store sales, but McAllister said major retailers like JCPenny and others have ramped up their own Internet offerings including online purchase options for consumers who want to “shop in their pajamas.” Internet sales account for about 15 percent of all retail activity.

Most retailers rely on the Christmas season more than any other time of year. Last year, the $27 billion in sales that the nation’s department stores did in December represented a 45 percent increase from November, the largest month-to-month increase of the year, according to federal Census data. Among the sectors that typically see the biggest jump at Christmas time are book stores, which saw sales in December 2009 jump 98 percent over November, and jewelry stores, which saw a 135 percent month-over-month increase last Christmas time.

Meanwhile, nearly half of consumers say they’ve already started their Christmas shopping, according to AAA’s Annual Holiday Shopping Consumer Pulse Survey. The auto club survey found 45 percent of respondents said they have already started, and more than half – 54 percent – said they expect to spend the same amount of money as they did last year.

By Michael Peltier
The News Service of Florida

Sittin’ on a Simmer