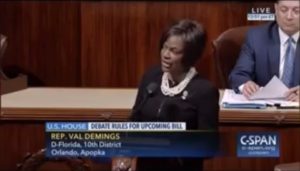 Congresswoman Val Demings responded on the House Floor last week to Republican’s blocking efforts to introduce an Amendment made to HR 1039.  The Amendment would have created a provision in law to prevent the Director of the FBI from being removed, except for “inefficiency, neglect of duty or malfeasance in office.”

Republicans prevented the amendment from being offered during debate on the bill.

“This amendment would insulate the FBI’s mission from political influences and agendas,” said Congresswoman Val Demings. “Unfortunately, it appears that the Republican Leadership doesn’t think that is a good idea, or simply doesn’t want to have that debate.”


The amendment was introduced in response to the firing of FBI Director James Comey.

“It is the responsibility of Congress to ensure that all our law enforcement and intelligence agencies are able to fulfill their mission, to protect and defend the United states and enforce criminal laws as appropriate.”

Text of Amendment, as provided by Rep. Demings’ office:
SEC. 3. SENSE OF CONGRESS.
It is the sense of Congress that the positive contributions of law enforcement officers who serve and protect our communities across the nation, as well as those who have lost their lives in the line of duty, should be recognized. Therefore, it is of upmost importance that the full faith and integrity of all entities that work and collaborate with local and state law enforcement, including the Federal Bureau of Investigation, be nonpartisan and cooperative of respecting the law, and that the President of the United States, U.S. Attorney General, and Deputy U.S. Attorney General refrain from directly or indirectly interfering in the manner in which the Federal Bureau of Investigation collaborates with State and local law enforcement.
SEC. 4. DIRECTOR OF THE FEDERAL BUREAU OF INVESTIGATION ONLY REMOVABLE FOR CA– USE.
Notwithstanding any other provision of law (including chapter 33 of title 28, United States Code), the Director of the Federal Bureau of Investigation may be removed only for inefficiency, neglect of duty, or malfeasance in office.

What do you think of the proposed amendment from Rep. Demings?