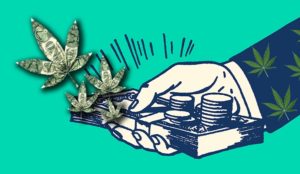 This could quite possibly be one of the biggest debates that pit state governments against the federal government: legal marijuana (medical and recreational included).  The current Schedule 1 designation has cannabis as being more detrimental than cocaine and on par with heroin, LSD, and bath salts.

There’s been a much harder push lately for legalization efforts by states without current sets of laws as well as states that have only been approved for medical marijuana sales. Here in Florida, voters approved a constitutional amendment making medical marijuana legal, but the Republican-controlled state legislature failed to do their job and regulate it. It likely will not be long until the full push to legalization. Connecticut, New Jersey, Vermont, and even Michigan have all recently been in the news after throwing their hats into the ring for legalizing marijuana in their respective states.


Considering that legal weed in North America is expected to reach $22.6 billion in revenue in 2021 and that the still prevalent black market for weed is raking in somewhere north of $46m, it may be safe to say that as more states come online for legal cannabis, marijuana sales could be set to top the charts of some of the biggest industries we know today.

Think about this, Chocolate in the US is expected to bring in $25 billion by 2019, Cookie sales were under $6 billion last year, and bottled water sales aren’t expected to reach the $22-24 billion mark until 2024. By comparison, the marijuana industry could “smoke” major markets of scale in a very short period of time and because of this, many onlookers are trying to identify opportunity through early investment.

Some look to benefit from grow operations and others are looking to benefit from the health impact via biotech and health sciences companies.  Everything else in between has many new and seasoned investors taking into account the dramatic growth expected as the US and North America in general begins to spark conversation about legalization of marijuana.

Right now any cannabis business that operates under state laws have been denied access to the banking system due to the fact that banks can be prosecuted under federal law.  Forget about chocolate for a moment because an industry that’s seemingly set to see large growth in a short period of time still remains, for the most part, an all cash business; despite the fact that these businesses still are required to pay taxes (in all cash sums).

This new bill would block federal banking regulators from prohibiting or penalizing banks from providing financial services to state-sanctioned, legal, and regulated cannabis businesses or associated businesses.  It would also end or at least limit a bank’s federal deposit insurance strictly based on a bank providing a service to these types of businesses. It would further limit the recommendation and incentivisation of banks to halt or even downgrade banking services to cannabis businesses. A move to put this into law would be another big step to further legitimize the marijuana industry as a true industry of scale in today’s modern culture.

House Bill 919 Keeps the Power with the People