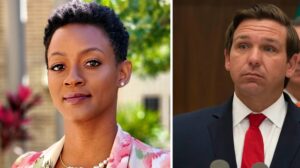 As Governor Ron DeSantis prepares to hand out $624 million of Floridians’ public dollars to the top 1% most profitable corporations in the state, Jacksonville State Representative Angie Nixon submitted a list of questions to the Department of Revenue in hopes of getting answers regarding the state’s system of taxation and on the tax obligation of corporations that do business in Florida.


“As rent and property insurance rates skyrocket, the Governor is about to hand out hundreds of millions of our tax dollars to a small handful of big corporations. This is the second time that the Governor has given rich refunds to these same huge companies – many of which are now helping to fund the Governor’s re-election campaign,” said Representative Nixon. “Floridians can’t even get their rent assistance on time, but the Governor is racing to give these corporations $624 million by May. We deserve to know far more about the corporations that are taking so much of our money.”

State Representative Nixon hopes to hear back from the Department of Revenue in a timely manner and share the findings with the public, to ensure our dollars are invested in people’s needs, not corporate greed.

“I applaud Rep. Nixon’s efforts. Floridians have a right to know far more about the corporations that are benefiting from the Governor’s handouts,” added Orlando State Representative Anna Eskamani, Ranking Member of the Ways & Means Committee. “We secured major victories this session by defeating billions in new corporate tax giveaways. Unfortunately, Floridians are still paying for laws the Governor already approved.”

Under a measure adopted by legislators and signed into law by Governor DeSantis in 2019, the top 1% most profitable corporations in Florida are slated to receive a $624 million corporate tax giveaway by May. Altogether, HB 7093 (2018)) and HB 7127 (2019) have saved the top 1 percent of businesses in Florida an estimated $3.7 billion. That’s the equivalent of nearly two decades of spending on affordable housing.