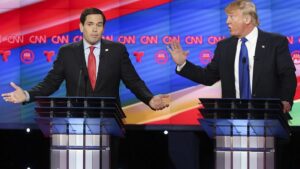 President Donald J. Trump is hosting a “Get Out the Vote Rally” in support of endorsed candidate Senator Marco Rubio in Florida. There’s a long list of Republican speakers, but one big name missing is Governor Ron DeSantis, who is also being pushed towards a possible future presidential run.


President Trump says he delivered a historic red wave for Florida in the 2018 midterms with his slate of endorsed candidates up and down the ballot and molded the Sunshine State into the MAGA stronghold it is today. He is hoping for a bigger red wave this year to flip Congress.

President Trump is going even further, stating that Florida is no longer a purple state and claiming it’s an America First Red State.

With some of the Trump messaging and focus on Florida, it does raise questions about a potential Republican presidential primary between former President Trump and current Governor Ron DeSantis.

The Trump rally for Rubio is scheduled for 5:00pm at the Miami-Dade County Fair and Exposition: