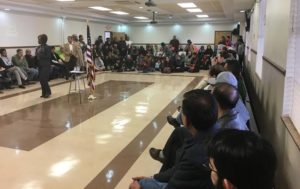 The group of over 200 people turned out for the community discussion to talk about the effects the order was having on Central Florida residents and next steps in the community.

“This isn’t a Muslim issue, this is an American issue,” said Congresswoman Val Demings. “We are hearing stories from around the nation and the world, stories of children, families, and students who are unlawfully being detained or denied the right they earned to enter the United States. It is unconstitutional and offensive.”

“We must call this executive order what it is, discrimination,” Demings said. “To deny refugees, who have gone through extreme vetting, the right to seek refuge and prosper in the greatest country in the world, goes against the values this nation was built on.”

“Our community sent a message to President Trump and his administration today that we stand united together, ready to fight his extreme agenda,” she added.