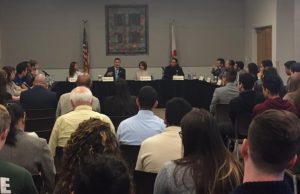 “We can’t burden individual students with additional debt,” Pelosi said to students at the event. “Nothing brings more money to the treasury of the United States to reduce the deficit than the education of the American people.”

Students and millennials in Central Florida contend with issues such as student loan debt, homelessness, and the risk of losing quality health insurance if President Donald Trump and Congressional Republicans repeal the Affordable Care Act. In addition, undocumented students could face deportation because of President Trump’s threat to dismantle the Deferred Action for Childhood Arrivals (DACA) program.

Rep. Soto is already spearheading efforts in Congress to help students cope with the costs of higher education by drafting legislation that would put money back into student’s pockets. Soto represents Florida’s 9th Congressional District in Central Florida.

House Democratic Leader Nancy Pelosi did not leave before making quite an endorsement of the first Puerto Rican from Florida in Congress.

“It was a very special day for me,” Pelosi added. “I’m very grateful to Congressman Soto for making this possible. I’m very grateful for the people of this district for sending such a distinguished young Congressman to the Congress of the United States who is effective from the start. He has focused the attention of the Congress, in his very first days there, on issues of concern to this district and this great state. You should be very proud, we all are, of him.”