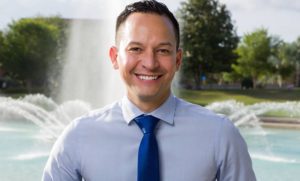 “I am a proud liberal progressive, gay, Latino, feminist Democrat,” is a greeting Carlos Guillermo Smith likes to use to introduce himself.  Likewise, he boldly describes his political agenda as one that tackles problems like discrimination, gun violence, disparities in the criminal justice system, and other topics.  Smith is running for the new House District 49 which includes a large slice of central Orlando and central and east Orange County.  His only opponent is Shea Silverman, a No Party Affiliation candidate who promotes himself as a computer programmer and technophile; Silverman has raised just under $3,000 to Smith’s nearly $122,000.

The district includes the University of Central Florida, where Smith graduated from with a Business Administration degree in 2003.  Smith spent a few years in retail, and then entered politics in 2011 as a volunteer for then congressional candidate Alan Grayson.  He worked as an intern for Equality Florida, the statewide civil rights organization which promotes anti-discrimination on the basis of LBGT identification and other topics. Smith says that he volunteered for Obama for America, helping UCF students register to vote and to organize the campus and greater Orlando.

Smith is quick to talk about his ambitious, broad, and progressive agenda.  He has specific plans to ban discrimination in the child adoption process, make college more affordable, fully decriminalize marijuana for personal use, and to reform Florida’s gun laws.  Smith is quick to engage potential voters and other members of the community, speaking both Spanish and English in the diverse communities of greater Orlando.  He supports public education, and wants to minimize the tax dollars available for charter school.

Smith knows his district like the back of his hand, and regularly connects with many of the political and community members who make up the district.  He energetically talks about the importance of decoupling casino gambling and greyhound racing as a way to end cruelty associated with dog racing.  Smith wants to revamp the public school teacher accountability system, promoting realistic teacher evaluation plans that benefit students, teachers, and the public.

The Pulse gay nightclub shootings concerned Smith personally, as many of the victims were both Hispanic and gay.  He refers to the shootings as “the hate crime massacre of Pulse,” and sees it as one which will result in social awakening “out of the complacency” related to gun sales and use.  Smith unabashedly promotes the importance of banning high-capacity gun magazines, requiring gun safety checks, banning civilian-owned military style assault weapons, closing the loophole for private or online sales that do not require a background check as well as requiring background checks for gun show sales and more.

The topic of medical marijuana will be on the November ballot in Florida as a revision to the Florida Constitution, a provision which many legal and political experts think likely to pass.  Smith wants to go even further, with the full decriminalization for personal use and possession of 20 grams or less of the drug.  He wants to make such possession a matter of mandatory civil citations, statewide.  Currently, in Orlando, possession of small amounts of marijuana allow the responding police office to make an arrest or issue a citation.  However, this discretion might be subject to abuse and misuse, and Smith wants to make such actions consistently and equally treated as a civil citation. It appears likely that Smith will take his seat in the Florida House with passion and tenacity and continue to offer wide-ranging social reforms options throughout his time in the chamber.