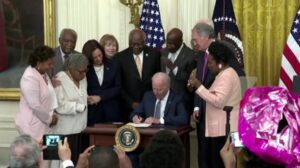 “And then on that summer day, 156 years ago, the enslaved people of Texas learned the news,” Vice President Kamala Harris said before introducing President Joe Biden at the signing ceremony. “They learned that they were free. And they claimed their freedom. It was indeed an important day.”

The President and Vice President were joined by Congressional leaders and community leaders to make recent legislation official to make June 19th a federal holiday commemorating the end of the legal enslavement of Black Americans.


“And still let us also remember that day was not the end of slavery in America, the truth is it would be six more months before the 13th Amendment was ratified, before enslaved people in the South and the North were free,” the Vice President continued. “So as we commemorate the history of Juneteenth, as we did just weeks ago with the history of the Tulsa race massacre, we must learn from our history. And we must teach our children our history, because it is part of our history as a nation. It is part of American history.”

Civil Rights attorney Natalie Jackson, who is running for Congress in Orlando to replace Demings, is calling for more actual progress to help people rather than symbolism. “So, the U.S. Senate can unanimously vote for a Juneteenth holiday, but they can’t get even half of its members to vote for universal healthcare, justice reform, or a voter’s rights bill passed?” Jackson questioned on social media. “While a Juneteenth Holiday is appreciated as a respectful SYMBOL of our shared history in America, symbols without PROGRESS are meaningless.”

Jackson said Black people across America are disproportionately disenfranchised, citing issues with adequate housing, wages, healthcare, and opportunity. She says until those problems are solved, “the Juneteenth holiday is just a meaningless facade of respectability, erected to hide the inaction to enact laws that would sustainably and meaningfully change the lives of Americans for the better.”

However, the Vice President and President still celebrated the historic moment.

“So let me end by saying this, we are gathered here in a house built by enslaved people,” Harris continued. “We are footsteps away from where President Abraham Lincoln signed the emancipation proclamation, and we are here to witness President Joe Biden establish Juneteenth as a national holiday.”

There was also a bit of bipartisan praise from the Democratic President.

“This will go down, for me, as one of the greatest honors I will have had as President, not because I did it. You did it, Democrats and Republicans,” President Biden said at the signing ceremony. “But it is an enormous honor, thank you for what you have done.”

Federal employees will start taking the holiday off this year, observing it on Friday since Juneteenth falls on Saturday.

Locally, there will be a Juneteenth Freedom Day event on Saturday, June 19th. From 11am to 3pm, there will be food, fun for the family, live music and outdoor activities at the John H. Jackson Community Center (711 South Westmoreland Drive 32805). The event is organized by local community leader Lawanna Gelzer. There is limited space, so for the free luncheon you must RSVP to LawannaGelzer@aol.com.