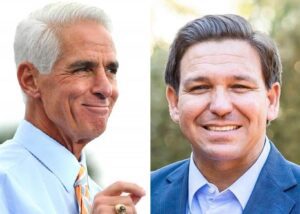 Florida Governor Ron DeSantis is on track for re-election, leading Democratic challenger Charlie Crist by 11 percentage points and garnering strong approval ratings, particularly for his response to Hurricane Ian, according to a recent statewide poll from Florida Atlantic University.

In the race for Florida governor, DeSantis leads Crist 51 percent to 40 percent, a survey of registered voters by the Florida Atlantic University Business and Economics Polling Initiative (FAU BEPI) shows.


The Republican incumbent’s overall approval rating was 53 percent, and his hurricane response approval was better at 63 percent. In addition, 66 percent of respondents expect DeSantis to be re-elected.

“Republicans continue to perform well in Florida,” said Kevin Wagner, Ph.D., a professor of political science at FAU and a research fellow of the initiative. “If these numbers hold, Florida’s status as a battleground state might be in question.”

Wagner noted that both Democratic candidates are doing well with younger voters, but they will need higher turnout to close the gaps in these races.

Biden’s approval rating was underwater – 41 percent favored the job he is doing and 50 percent opposed.

The survey was conducted October 12th-16th. The survey has a margin of error of +/- 3.65 percentage points. The polling results and full cross-tabulations are available by clicking here.