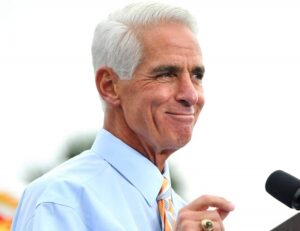 Following Charlie Crist’s debate performance against Governor Ron DeSantis, the Democratic campaign reported a fundraising haul of over half a million dollars, including over $225,000 in what was one of the campaign’s best digital fundraising day, pulling donations from nearly 12,000 donors. The Crist campaign added that nearly half of whom were first-time donors.

“Monday’s debate changed the game — and Floridians are fired up,” said Crist communications director Samantha Ramirez. “Floridians saw Charlie and Ron side by side, and the choice couldn’t be more clear: a governor who doesn’t even want the job, or a public servant who will fight every day to protect our freedom to choose and and to live a good life in the Sunshine State.”


Crist’s campaign also said the Democrat’s debate performance led to a wave of online momentum with the campaign receiving more than 12.6 million impressions on social media. But will it lead to more votes? Recently, polling still shows Republican DeSantis with a comfortable lead, and the incumbent does not appear worried about his re-election race.

While Crist claims momentum, the reality is DeSantis did not fumble during the debate and had a bunch of soundbites ready to unload for his own political base. Still, the Democratic candidate wants to take on the incumbent Governor in more debates and Crist is calling on DeSantis to accept two more debates to fulfill the challenge of three debates that Crist proposed back in September.

“One hour was apparently not enough time for Ron DeSantis to answer some simple questions, like whether he will stay in the job for four years and whether he will ban abortion outright,” said Charlie Crist. “I know he had a rough night, but I’m happy to give him a do-over because the people of Florida deserve to hear him answer those questions.”

Following the August primary, Crist proposed three debates with Gov. DeSantis, but he was only willing to accept one debate with the conservative Sinclair broadcasting network. With the unanswered questions from Gov. DeSantis piling up, Crist says “it is time for DeSantis to face Floridians with honest answers.”