Governor Ron DeSantis has announced that he will not extend the federal unemployment benefits for Florida beyond June 26th, causing thousands of unemployed Floridians to lose the critical benefits they’re eligible for as taxpayers.

The Equal Ground Education Fund, a Black led non-profit working to build Black political power in Florida, launched a major petition campaign in response to Gov. DeSantis’ decision, highlighting how detrimental this is to Black Floridians who have been adversely affected by the virus.


“Yet again Gov. DeSantis has demonstrated that he is not committed to doing what is in the best interest of the most vulnerable in our state,” said Genesis Robinson, Equal Ground Education’s Volusia County Regional Coordinator. “The decision to prematurely end participation in the Federal Pandemic Unemployment Compensation program on June 26th is more about scoring points for his political future than it is about the needs of Floridians. With some families losing as much as $4,800 in income because of this decision, there is no doubt that for some, these funds will be the difference between shelter, food and/or childcare. With school districts all over the state now on summer break, for some parents, this sizeable reduction of income exacerbates the already daunting task of providing  for their children while school is out.”

The campaign, which will continue until additional benefits are set to expire on June 26th, encourages folks to email, call, and speak out on social media to pressure Gov. DeSantis into reversing his decision and allowing Floridians in need, again disproportionately Black folks, to keep receiving these additional benefits provided to them by the federal government.

“As we continue to navigate out of the COVID-19 pandemic and return to normal, this heartless decision is potentially a setback to thousands of Floridians on their road to recovery,” Robinson added. “If the Governor were sincere about his commitment to rebuilding our economy he will reverse his decision and continue to allow unemployed Floridians to receive the benefits they are eligible for.” 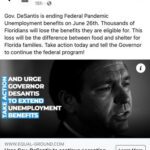 EGEF has launched this Facebook ad targeting hundreds of thousands of folks across Volusia, Pinellas, Orange & Seminole counties urging them to take action. The group is emphasizing how Gov. DeSantis’ decision will have a detrimental financial impact on thousands of unemployed Floridians who depend on this, especially people of color throughout the state, many of which have faced even more hardship over the course of the pandemic.