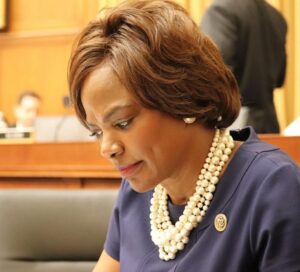 U.S. Representative Val Demings introduced the “Every Vote Counts Act,” new legislation to promote every American’s right to easily, safely, and securely cast their vote according to her office. The Every Vote Counts Act will require every state to implement a ballot tracking system for vote by mail, require every county in America to have ballot drop boxes, and require NIST and the Election Assistance Commission to develop standards for alternatives for signature matching verification requirements for vote by mail. Demings is running in the Democratic primary for U.S. Senate against Alan Grayson to take on Republican Senator Marco Rubio.


“American voters turned out in record numbers in 2020,” said Rep. Demings. “With voting rights under attack across the country, it is critical that we protect mail-in voting and drop boxes, which allowed millions of Americans to vote safely and securely last year, including many with disabilities or other limitations that make going to a polling location difficult.”

“Let’s not be distracted by politically-motivated lies which seek the undermine faith in our elections,” Rep. Demings said. “The Department of Homeland Security under President Trump reported that last year’s election was the most secure in our nation’s history. Unfortunately, Republicans in state legislatures across the country are seeking political advantage by attempting to stop certain people from voting. When we take away someone’s vote, we take away their voice. As Dr. Martin Luther King Jr explained, ‘So long as I do not firmly and irrevocably possess the right to vote I do not possess myself. I cannot make up my mind—it is made up for me. I cannot live as a democratic citizen, observing the laws I have helped to enact—I can only submit to the edict of others.’”

“Every American must have the opportunity to vote—no matter their political affiliation,” Rep. Demings added.

“This important effort will strengthen election security and expand access to the ballot box for millions of Americans across the country,” said Rep. John Sarbanes, who chairs the Democracy Reform Task Force and assembled the For the People Act. “I salute Congresswoman Demings for her commitment and leadership in our critical fight for voting rights.”

“As politicians across the country move to limit the use of ballot drop boxes and place unnecessary and overly burdensome requirements on mail-in ballots, we need the Every Vote Counts Act to make certain every voter can cast their ballot and have that ballot count,” said Jon Greenbaum, Chief Counsel and Senior Deputy Director of the Lawyers’ Committee for Civil Rights Under Law. “Signature matching requirements and the restriction of ballot drop boxes have negative effects on Black Americans and other communities of color. This bill will put a stop to these discriminatory acts, and encourage all Americans to go out and make their voice heard. Our democracy demands participation to represent the will of the people.”

“At both the national and state levels, there are ongoing policy discussions occurring that will ultimately impact the voting interests and opportunities of voters with disabilities, a voting bloc that included nearly 15 million voters during the 2018 midterm elections,” said Tony DePalma, Director of Public Policy at Disability Rights Florida. “Too often, these discussions have commenced or been completed without the perspective or input of voters with disabilities themselves. Disability Rights Florida applauds and supports introduction of the Every Vote Counts Act which presents Congress with the opportunity to consider barriers to voting such as signature verification and drop box accessibility in terms that are relevant and meaningful to voters with disabilities in our states and across the nation.”

$26.5 Billion of Rescue Payments Have Gone to Floridians