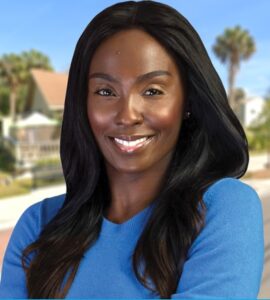 Pasha Baker, the 2020 Democratic nominee for Florida House of Representatives 28 from Seminole County, announced the launch of Seminole Forward – a truly local, grassroots political organization committed to flipping local and state elected offices blue in Seminole County – wherever those new district lines will be redrawn.

Baker is a businesswoman and the CEO of the Goldsboro West Side Community Historical Association. She previously won 45,288 votes in the November election – by far, the most of any past Democratic State House 28 nominee. The results have already positioned her as a leading candidate and public figure to watch in 2022.

Following the Democratic victories in Georgia of two U.S. Senate races, and the certification of President-elect Joe Biden and Vice President-elect Kamala Harris, Democrats are more determined than ever to win local races.

“We are inspired by both the Democratic wins in Georgia, and by Joe Biden and Kamala Harris winning Seminole County in November,” said Baker. “That’s why we’re committed to expanding our operation and reaching voters far ahead of the November 2022 election.”

Seminole Forward’s mission is to build early excitement for Democratic candidates who plan to focus their efforts on reopening Florida’s economy safely, creating jobs, and expanding professional career opportunities like vocational training. The focus of the organization is on bringing greater economic opportunities to Seminole County.

Baker is active in community initiatives that promote health and economic recovery. She was a driving force in the collaboration to open Allied Health’s first-of-its-kind clinic in Goldsboro, which has been instrumental in ensuring affordable health care and the prompt rollout of vaccinations.

Baker’s new Seminole Forward organization will be an extension of her community-building work, focusing on increasing in-person voter contact five-fold, starting more than 19 months before the August 2022 primary election. Seminole Forward will maintain active, year-round voter contact to ensure every single voter has been IDed and is prepared to vote early and by mail next year.

The group will build down-ballot turnout through sustained voter contact, targeted digital media, and persistent, innovative outreach. They will continuously educate voters, connecting them with Baker’s priorities of jumpstarting our local economy and getting Seminole County residents safely back to work.