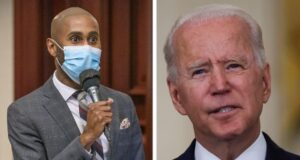 Orlando State Representative Travaris McCurdy sent a letter to President Joe Biden, personally appealing for emergency help for the people of Florida. “We are in a crisis,” he wrote as he described the current COVID-19 status in Florida.

He described Florida Governor Ron DeSantis’ policies as counter to science and the reason for the current COVID-19 outbreak. “Politics has overridden science and common sense, leaving Floridians to the mercy of one man’s ruthless national political agenda,” the State Representative wrote.


In the letter McCurdy writes to Biden: “As doors swing open to a new school year, educators have been cowed by a governor and his administration’s banishment of mask mandates endorsed by the scientific community as effective prevention measures. Those bold enough to buck the governor are now threatened with loss of school funding, including their salaries – effectively defunding public education under the guise of so-called ‘freedom.’ There is no ‘freedom’ in illness. There is no ‘freedom’ when the welfare and health of our fellow citizens are held under constant threat to serve someone’s personal ambitions.”

The Orlando State Representative called for requiring masks in schools for all students, protecting against any attempts to defund local school boards, and protecting “home rule” authority over Governor DeSantis.

“As a father penning this letter watching my three-year-old daughter, joining countless other fathers and mothers similarly watching their own children, I urge you to use your power as President to ensure and enact proper public health measures for the safety of every child in Florida,” Representative McCurdy concluded.