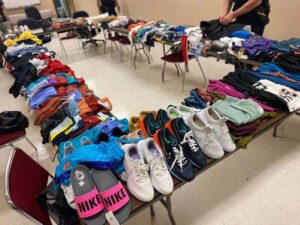 As crime throughout the Orlando area continues to be a problem, Orlando police recently carried out operations to recover thousands of dollars in stolen merchandise from the Orlando Premium Outlets. The two-day Retail Theft Operation targeted the International Drive Corridor, where stores lost more than $36,000 in two quick hits.

West Patrol Division Officers, International Drive Bikes, and detectives at OPD’s Crime Center partnered together for the police operations, which led to the arrest of two couples who traveled from Miami to Orlando for the stealing spree.

OPD credited “effective teamwork” in the retail theft operation. But with only two couples caught, everyone in Orlando knows there is much more crime happening. That’s why Orlando police remind the community, “if you see something, say something” by calling the anonymous tip line Central Florida Crimeline at 1-800-423-TIPS (8477) or **TIPS (8477).