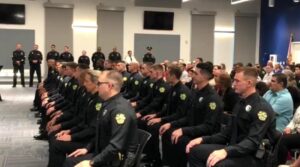 The Orlando Police Department held a swearing in ceremony for the city’s newest 22 recruits. Nearly half have served in other agencies and bring a combined 50 years of experience to the local police force. Nearly one quarter of the Orlando police recruits grew up right here in Central Florida, some are bringing military experience, and one played for the Orlando Solar Bears.


One recruit, Officer Makenson Chery, who was an Orlando Police Explorer years ago, now has come full circle in working for OPD. He talked about how the Explorer program and supervisor SRO Scott Daniels had a positive impact on his youth. Officer Chery grew up in Parramore, Washington Shores, and Pine Hills, and has served the Sanford Police Department for 2 years. He talked about the impact SRO Daniels had on his life through the Explorer program.

“You are the individuals we felt had the highest standards needed to be part of the Orlando Police Department and a member of law enforcement,” OPD Chief Orlando Rolón said. “Although at times you might hear otherwise, always remember, most of the citizens in our community appreciate and support you.”

OPD Chief Rolón added the recruits are held to “higher expectations than other professions.”

And if you want to learn more about the Orlando Police Explorer program, click here.

RELATED: Gun Violence in Orlando Up 24% Compared to Last Year