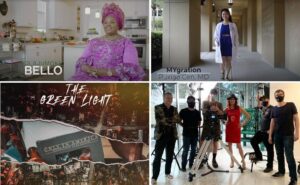 The proprietor of one of Orlando’s favorite Vietnamese restaurants and a career firefighter who moonlights as a Polynesian dancer are just two of the local luminaries who will be profiled in this year’s MYgration Films program, screening Tuesday, September 29th, at Maitland’s Enzian Theater.

Presented as part of the Global Peace Film Festival, the screenings will consist of documentary shorts about 11 Central Florida residents whose lives and work make them unofficial flag-bearers for their cultural heritage. Subjects include Cindy Pham, who owns the Veggie Garden Restaurant on East Colonial Drive, and Kamalu Kong, a 20-year veteran of the Orlando Fire Department who has a side business specializing in Polynesian dance and catering.


In what is becoming an Orlando tradition, the films were produced under the umbrella of FusionFest, the multicultural outreach project that started in 2018 as a Thanksgiving-weekend outdoor celebration and has since grown into a year-long program of heritage-minded events and outings.

The MYgration Films screenings at the Global Peace Festival will be at 5 p.m. and 7 p.m. on the aforementioned Tuesday. For tickets, visit: FusionFest.org/Film

According to Lori Turchin, co-curator of the MYgration Films project, its audience is in for a treat this time. “We have fantastic films showcasing 11 Central Floridians that we paired randomly with 11 FusionFest filmmakers,” she says. “The result is a true fusion of cultures and how we can all get along when striving for a common goal: in this case, good storytelling in the form of a short film.”

OUC is sponsoring this year’s MYgration Films program, which pairs willing subjects with eager filmmakers at random and then sets them loose to get their stories told within a frenzied 5 days of activity. (This year’s filmmaking marathon took place during the final weekend of August.) The results debut at the Global Peace Film Festival, and are later shown again at FusionFest itself.

Standout entries earn awards from audience members and a panel of expert judges alike. This year’s lineup of filmmakers includes returning honoree Omar Young, who took the top prize in 2019 with “The Art of Patrick Noze,” a portrait of the Haitian-born fine-art impresario.

This year’s contest had an added educational aspect, with filmmakers treated to a timely workshop that shared tips for making movies in the age of COVID-19. Similar considerations will be paramount when FusionFest itself returns downtown Orlando November 28th and 29th: an expanded virtual component, a socially distanced Street Dance Party and a fashion show with masks as integral pieces are among the innovations that will help the event adapt to 2020’s drastically altered landscape.

As always, FusionFest will spotlight the music, dance, fashion, food and related creative expressions of the many heritage communities that thrive in Greater Orlando. Performances and presentations will again take place at the Seneff Arts Plaza at the Dr. Phillips Center for the Performing Arts and the Orlando City Hall Commons Plaza.

FusionFest is a project of the Downtown Arts District, with support from Orange County Government, the Orlando Downtown Development Board and the Dr. Phillips Center for the Performing Arts. In its inaugural edition, the event received the Award of Excellence in the Downtown Orlando Partnership’s Golden Brick Awards, and took first place in the “Community Outreach Program” category of the Florida Festivals and Events Association’s SunSational Awards. This year, Fusion Fest was a winner in SunSational’s “Banners” category.