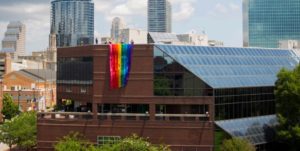 In tribute to the lives lost at the Pulse Nightclub shooting and in support of freedom lovers worldwide, Section 93 of the Sea-to-Sea Rainbow Flag will once again be on display at the Orange County Administration Building in Orlando, beginning Monday, June 12th.  Mark Ebenhoch, Executive Director of LoveisLove Key West, will accompany the flag (Section 93).

Last June, Section 93 was also displayed at the County Administration and this year it will be displayed for at least one week. In addition, there is Pulse art on display in the County Admin building. The pieces in the atrium were selected from the Paint Orlando Strong collection from Sam Flax Orlando.


The Sea-to-Sea Flag has become a globally recognized symbol of the LGBTQ movement and symbolizes acceptance, understanding, education, solidarity and inclusion.

The original rainbow flag was designed by San Francisco artist Gilbert Baker in 1978 as a symbol of gay and lesbian pride in response to anti-gay activities. In the spring of 2003, Baker and a team of volunteers cut and sewed a 1.25-mile-long version of the flag in Key West, to celebrate the iconic banner’s 25th anniversary. On June 15, 2003, some 2,000 volunteers unfurled the flag from the Atlantic Ocean to the Gulf of Mexico along the entire length of Duval Street, in a sea-to-sea representation of pride and diversity. Section 93 has since traveled worldwide.