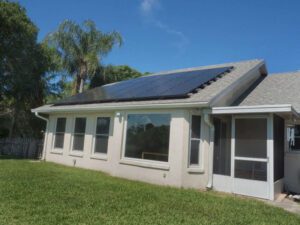 The Orange County 2022 Solar Co-op has selected All American Solar to install solar panels for the more than 200 members currently in the group. Co-op members selected All American Solar through a competitive bidding process over ten other firms. The group will hold its final virtual Solar 101 Info Session on Wednesday, August 17th at 6:00pm to 7:30pm to educate the community about solar and the co-op process.


“Millions of Americans are realizing that solar power is not only environmentally friendly, but a smart financial decision for their family that saves thousands in electricity costs and gives them peace of mind,” said Steve Lorenz, owner of All American Solar.

Co-op members selected All American Solar because of their competitive pricing, equipment offerings and system warranty. The co-op is open to new members until August 31, 2022. Orange County residents interested in joining the co-op can sign up online.

The solar co-op is free to join and joining the co-op is not a commitment to purchase panels. All American Solar will provide each co-op member with an individualized proposal based on the group rate. By going solar as a group and choosing a single installer, members can save on the cost of going solar and have the support of fellow group members and solar experts at Solar United Neighbors.

This co-op is funded by the Orange County Government. Additional partners include City of Orlando, Alianza for Progress, the CLEO Institute, IDEAS for Us, City of Apopka, City of Maitland, City of Winter Park, the League of Women Voters of Orange County and the Solar and Energy Loan Fund (SELF).

SUN has hosted 73 solar co-ops in Florida since 2015. According to the group’s estimates, the 2,140 homes and businesses that now have solar panels because of co-ops represent: 20.9 thousand kW of solar power, $49 million in local solar spending, and more than 713.3 million lbs. of lifetime carbon offsets.

Florida Solar 101 Info Session
Learn about solar energy and its benefits for your home, or small business. Discussions on technology, economics, financing, and more.