Not All Teens Get This Rite of Passage – Until Now 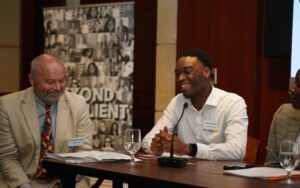 Do you remember that first taste of freedom when asking mom or dad for the car keys after getting your driver’s license? It meant independence – and responsibility.

Not every 15 or 16-year-old enjoys this rite of passage.

For thousands of teens in foster care, they are limited in their ability to learn how to drive, pay for insurance and obtain a license. That was one of the driving factors behind why Embrace Families, the lead nonprofit agency overseeing child welfare in Central Florida, shifted into overdrive and made changes to the system.

Now nearly a decade after developing, implementing and expanding a program called Keys to Independence, more than a thousand teens in Florida’s foster care system have a driver’s license. And one of them shared his story with U.S. Congressional leaders during a special presentation on July 18th.

Marty Lowery, now 25, is a prime example of why a driver’s license is an important step on the road to independence for teens in foster care. Lowery entered foster care at the age of three. The financial support provided by the program allowed him to earn his driver’s license at 17 and save money to buy his own car.

“[To get a driver’s license], you have to go with someone to the DMV, and you have to have someone put you on their insurance,” Lowery explained to U.S. lawmakers at the July meeting. “A lot of caregivers were wary of that because they couldn’t afford to put an extra $600 onto their insurance policy or didn’t want to assume the additional liability.”

Lowery, now 25, is working in Seminole County, Florida, as an insurance adjuster for a nationally recognized firm.

Since its initial pilot in 2013, the Keys to Independence project has helped thousands of teens and young adults in foster care earn driver’s licenses by reimbursing costs associated with education, permits, insurance and obtaining a license.

Results of a recent study found that when compared to their counterparts, youth in foster care who have access to a driver’s license are more than 70% likely to earn a high school diploma or GED and are more than 45% likely to be employed full- or part-time.