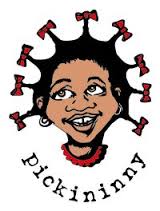 I live next door to a bonafide prick.

Discounting the race, the man is just a classless jackass!

However, much to my dismay, he is married to one of the sweetest women planted on God’s green earth.

Anyways, dude is a freaking jerk because you would have thought that after 15 years the proverbial “iceberg” would have thawed between us by now.

Would have thought that at least by osmosis some degree of home training, humanity, or etiquette would have rubbed off on him at this juncture.

So, my 2015 began just like my 2014 ended…dude still flashes me with the same shitty growl as in years past.

Doesn’t matter that each Christmas I dutifully bake an extra sweet potato pie to share with him and his lovely wife.

Doesn’t matter that I unhesitatingly rake, bag, and overlook that his rotten and decayed trees drop leaves year-round on my property.

Doesn’t matter that each day I routinely perpetuate the Negroid woman’s trademark by greeting dude with my best rendition of an Aunt Jemima smile. Then, I punctuate the morning’s air by being the first to exchange a hospitable greeting even though the prick rarely acknowledges my presence.

Nonetheless, three months ago as we played cat-and-mouse with the day’s pleasantries, I noted that dude was ghastly pale which was symptomatic of having a heart attack or stroke. Although I wanted to warn prick that he should immediately call a doctor, with the exception of sharing this dire news with my husband, I remained uncharacteristically silent.

Not one to hold animosities and grudges especially when a person is seriously ill visited dude in the hospital each week until he was discharged from the rehabilitation center.

On each visitation, began and ended each stay with a hug and encouraging words.

Would you freaking believe that even in his paralytic state, dude still flashed me with the same shitty growl as in years past?

Are you for real, chump?

During one call, his charming wife noticed her husband’s unprovoked rudeness towards me and instantly tried to “smooth things over.”

Whispering into my ear while tenderly holding my hands, she apologetically stated that her husband has trouble with “strong women.”

My interpretation: Her husband has trouble with strong “black” women!

My unspoken rebuttal to dude: Hopefully, the door won’t be locked when you get to hell. Meanwhile, mister, since you still have residency on earth, wouldn’t it be nice to make some amends?

And, why not begin with that strong “black” woman who has unceremoniously been taking a dose of your “bull” year-in and year-out!

As the old folks used to say…that’s “too much like right.”

Curiously, recently received some interesting stereotypic comments from a female version of dude.

Participating in a forum, was told by this dudette psychologist that I was too “expressive, aggressive, but obviously an accomplished and educated woman.” She recommended that I needed to “tone down!”

Wench, you “don pissed in the churchyard now!”

Within a damn nanosecond, had to search for my best rendition of an Aunt Jemima smile while, simultaneously and at the same time, had to control 500 years of black history which kept swirling and twirling throughout my head.

Slowly weighed if I should do a “Zimmerman” and “stand my damn ground” by giving dudette a piece of my “double-wide!”

Peacefully, projected that those visions of “pickaninnies” that kangaroo jumped in her head whenever she approached a black woman who was equally proficient and academically adept should not spawn psychoanalysis of her aggressiveness!

Peacefully, projected that my forebearers’ sacrifices and the reverence of my historical baggage makes me a consummate torch-bearer for the unsung heroes, heroines, and on behalf of my rich history, consequently, I plan on flaunting said significances with grandeur, grit, and gusto.

Peacefully, projected that I proudly wear my unflinching attitude and natural “blackness” with a bold dignity and with utmost swagger similarly to how actor Ted Danson wore a “blackface” at a roast for Whoopi Goldberg in 1993.

And, dudette, if you think yours truly exhibits an over abundance of uppitiness, just wait until your daughter or son meets my daughter because Mantha is really “over the top” with an air of self-esteem, uniqueness and, as well as, having a healthy racial identity as it pertains to her bi-racial heritage!

What is sadly clear to me is that “nostalgic perceptions” wormed itself into the psyche of my neighbor and poisoned the possibility of a well-meaning friendship.

What is pathetically clear to me is that “nostalgic perceptions” needlessly surfaced stereotypic portrayals of an “angry black woman” to dudette.

Finally, what is crystal clear to me is that “nostalgic perceptions” sorely needs to be obliterated…

With one neighbor or one act of kindness at a time!