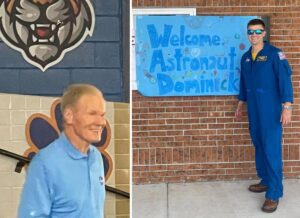 NASA Administrator Bill Nelson visited elementary school students about the future of space exploration on May 9th, and later toured a lab working on robotic construction technologies during a trip to Florida.

Nelson was joined by NASA astronaut Matthew Dominick and they spoke about the agency’s missions with students in grades three through five at Ventura Elementary School in Kissimmee, Florida. They also discussed the students’ space curriculum and the missions that will take their generation – the Artemis Generation – to the Moon and eventually Mars.

Nelson later visited Redwire Space headquarters in Jacksonville to tour the Archinaut testing and robotics lab. Redwire is working on NASA’s On-Orbit Servicing, Assembly, and Manufacturing 2 (OSAM-2) mission, which will build, assemble, and deploy a solar array in orbit.

During the visit, Nelson saw firsthand Redwire’s efforts to use lunar and Martian dust to 3D print on the Moon and Mars. The NASA administrator was set to be briefed on in-space servicing, assembly, and manufacturing (ISAM) capabilities, which support the national strategy announced by the White House Office of Science and Technology Policy and the National Space Council to transform space architectures and help maintain U.S. leadership in space.