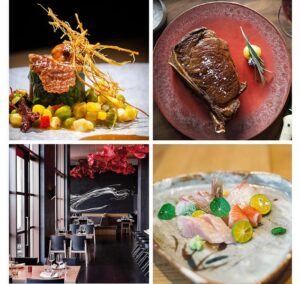 The Michelin Guide inspectors also found 29 restaurants worthy of the Bib Gourmand designation, which recognizes great food at a great value. These are restaurants where one can have two courses and a glass of wine or dessert for under $49. There were 19 in the Miami area, seven in the Orlando area and three in the Tampa area.

“As you can see, Miami, Orlando and Tampa have very much to offer to international food and wine enthusiasts,” said Gwendal Poullennec, International Director of the Michelin Guides. “These talented chefs and their committed teams create culinary experiences matched only by the amazing attractions of each city. This very first selection of the Michelin Guide in Florida highlights glittery Miami, storied Orlando and breathtaking Tampa, offering a unique blend of international cuisine and Florida flavors. Local foodies as well as travelers will enjoy exploring these mesmerizing and rich Florida culinary destinations.”

The Orlando restaurants that received a Michelin star are Capa, Soseki, Kadence, and Knife & Spoon:

Capa (Orlando, Steakhouse)
At the Four Seasons Resort Orlando at Walt Disney World; this steakhouse also flaunts a decidedly Spanish accent. Kick things off with ace tapas before indulging in a main dish, like flame-kissed ribeye with tamarind-ancho sauce.

Soseki (Orlando, Fusion/sushi)
This tiny operation with Chef Mike Collantes at the helm is an ideal illustration of a contemporary meal expressed by way of an omakase. A laser-like focus on local Florida produce results in a menu that changes monthly.

Kadence (Orlando, Japanese cuisine/sushi)
The omakase opens with hot dishes and cool sashimi. This is food that’s free-spirited, yet manages to honor the classic methods. Pacing is on point in sashimi like hamachi and hirame. Nigiri, like snapper with lemon and sea salt, will have you yearning for more.

Knife & Spoon (Orlando, Steakhouse)
This iteration from Chef John Tesar inside the Ritz-Carlton Orlando, Grande Lakes, is the picture of plush. Care and skill are the hallmarks of this team, as they turn out contemporary steakhouse fare woven with seafood.