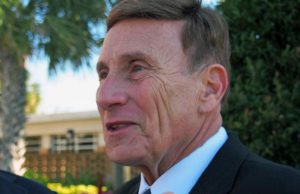 Given the chance to set the record straight on some very old statements, Republican Congressman John Mica refused to retract disgusting comments he made in opposition to protecting women from marital rape. Specifically, when Mica opposed a measure in the Florida House of Representative that would allow married women to file charges of rape by their husbands, he said “[T]he Bible doesn’t give the state permission anywhere in that book, for the state to be in your bedroom.”

And when recently prompted to account for these comments, Mica responded by touting his campaign cash advantage, totally ignoring the serious issue at hand.

“It’s shocking that John Mica wouldn’t retract his offensive comments or at least explain his opposition to a bill that protected women from rape by their husbands,” said DCCC spokesman Jermaine House. “This makes clear that John Mica isn’t willing to stand up for women in Florida and support measures to protect them, like this marital rape bill or the Violence Against Women Act.”

Debating a bill that would make it illegal for men to rape their wives, John Mica said ‘[W]e don’t need to go to meddlin’ in the marriage bedroom.’ Is it any surprise Mica repeatedly opposed the Violence Against Women Act? Call Congressman Mica, tell him that when he votes, Florida women matter. Paid for by the DCCC, www.dccc.org. Not authorized by any candidate or candidate’s committee. The DCCC is responsible for the content of this advertising.

“Considering that he is standing by his comments on marital rape, and Mica’s vote against the original Violence Against Women Act and its reauthorization, Mica clearly is not budging from his long-standing record of failing to protect women,” the DCCC said.

Longtime Congressman John Mica looked like he was in the clear in February, when underfunded Democrat Bill Phillips withdrew from the CD-7 race. Yet the DCCC is still after the Republican. It announced it’s paying for a radio advertising campaign this week “highlighting John Mica’s opposition to a Florida House of Representatives bill that would allow married women to file charges for rape by their husbands.” There’s a problem with tense here. That bill was filed long ago. THIRTY SIX YEARS to be exact. Still, what then state Rep. Mica said (as recounted in a 2009 Minnesota law school journal ) merits a mention: “[T]he Bible doesn’t give the state permission anywhere in that book, for the state to be in your bedroom and that’s exactly what this bill has gone to. It’s meddling in your bedroom … [W]e don’t need to go to meddlin’ in the marriage bedroom.”

MICA’S MONEY – Mica’s camp responded to the ad with a lengthy retort about “the latest of almost weekly DCCC attacks” in the race: “When the DCCC’s hand-picked Democrat candidate recently withdrew after he failed to gain any local support, cleaned out all but $750 dollars and returned big out of state donations, they ratcheted up their attacks and ridiculous rhetoric. Sadly for Central Florida, the DCCC is showing that they care only about partisan politics and electing a Democrat rather than electing a representative with a track record of accomplishing real things that benefit the daily lives of every resident in Central Florida, regardless of party. … There are plenty of reasons the Mica campaign has more than 6,400 contributors, including prominent local and state Democrats, and why our campaign has 1,700 grassroots supporters and volunteers and why we reported $639,000 cash on hand, the most raised in individual donations for any Central Florida Congressional candidate.”