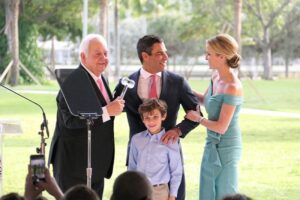 Miami Mayor Francis X. Suarez became the 80th President of the U.S. Conference of Mayors. Suarez was inaugurated at an event in Miami where he laid out his vision for American cities and the Conference. The mayor had been serving as USCM’s First Vice President but has been elevated to carry out the remaining term of outgoing President Nan Whaley, whose term as mayor of Dayton, Ohio expired at the beginning of the year. Suarez is also eligible to continue serving as president for another full year after this term expires this summer.


“The Conference of Mayors is fortunate to have such a dynamic leader serving as our next president,” said USCM CEO and Executive Director Tom Cochran. “Francis Suarez has limitless energy and a true passion for solving problems. The innovative approach he brings to Miami is emblematic of the way American mayors are thinking differently about the country’s greatest challenges. Mayor Suarez will be a powerful voice for America’s mayors and those they serve, and I know he’s going to get to work quickly as our new president. The Conference of Mayors is also eternally grateful to Nan Whaley for her distinguished service to this organization, and we wish her nothing but the best.”

“It is such an honor to lead this organization and carry the torch for America’s mayors as we continue to blaze a path toward better days,” said Mayor Suarez. “Mayors are proving every day that local leadership and fresh thinking can dramatically improve people’s lives. Here in Miami, we have a vision for what American cities can be – vibrant, resilient, inclusive – and I’m excited to lift up the voices of my fellow mayors who are also delivering real change. There is so much we can accomplish when we work together and leave partisanship behind, and that is the spirit of the U.S. Conference of Mayors. My father was a member of this organization and I have long understood how powerful it can be to have America’s mayors speaking together. I also want to thank Nan Whaley for her extraordinary leadership as President of the Conference. I’m excited to begin this new chapter serving the Conference, my fellow mayors, and the people of Miami.”

The U.S. Conference of Mayors is the official nonpartisan organization of cities with populations of 30,000 or more. There are more than 1,400 such cities in the country today, and each city is represented in the Conference by its chief elected official, the mayor.