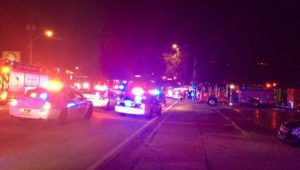 The violence in Orlando continues to spiral out of control. Orlando residents are shocked waking up to hear about another shooting in Orlando this morning. There are already daily reports of shootings and “The Voice” singer Christina Grimmie was shot and killed by a gunman at The Plaza Live Friday night. But last night was far worse, there was a mass shooting at the popular gay nightclub Pulse and at least 49 victims are dead.

The Orlando massacre is now the worst mass shooting in U.S. history.

The Orlando Police Department confirmed mass casualties from the shooting early in the morning. “We can confirm this is a mass casualty situation,” OPD tweeted. Florida Department of Law Enforcement spokesman Danny Banks officially classified the shootings at Pulse Nightclub as an “act of terrorism.”

The FBI is now taking over the investigation. At a press conference Sunday morning, the FBI said there is “no credible threat” known in Orlando at this time.

The scene became chaotic after the 2am shooting, as emergency vehicles and rescue squads took multiple victims to hospitals for medical care. According to witnesses, at least 40 shots were fired inside the Pulse club, with up to 20 people being killed.

Around 6am, police reported the gunman was dead inside the club.

“Everyone get out of pulse and keep running,” Pulse Orlando posted on its social media as the shooting was taking place.

Earlier in the day, the club was promoting a Latin-themed night. “Calling all our Latinos, Latinas & everyone that loves a little Latin flavor,” the club posted. “It’s time to party tonight!”