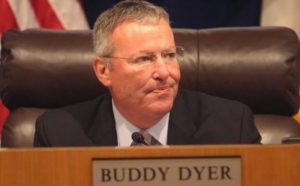 Yesterday, a nationwide school walkout was organized by students who are tired of words and are demanding real action. Earlier this week, Buddy Dyer finally chimed in saying he was “calling” for the walkout that was already planned and happening, attempting to insert himself into the students’ new political movement. Sorry Mayor Dyer, supporting a school walkout in honor of the one-month anniversary of the tragic school shooting in Parkland is the easy way out compared to your actual politics on gun violence.

It also contradicts Buddy Dyer’s political actions during election time, when he is known to support and even endorse conservative pro gun, pro-NRA Florida Republicans. Dyer has a long history supporting members of the Republican Party, the party that continues pushing pro gun policies in Florida. Whether you are for reducing gun violence, for more gun control or for less gun control, Dyer’s hypocrisy should anger you and his grandstanding needs to end.

In fact, Buddy Dyer was pretty much silent on guns for years. On assault weapons, it took until he was quoted on Feb. 28th saying “I do support a ban on assault weapons moving forward.” Very convincing answer huh? Well where was Dyer while fellow Orlando Democrat and State Senator Linda Stewart was fighting this year to have her assault weapon ban legislation heard in Tallahassee? Did Dyer lobby his buddies in the Florida legislature for gun control? Nope, at least not publicly, which means not at all.

No one should expect Dyer to do much on this. He didn’t even support Democrat Linda Stewart, who proposed the assault weapon ban that failed in the Republican-dominated Florida legislature. While Dyer reluctantly did endorse Linda Stewart in 2016, he actually supported her Republican opponent as Dyer’s picture and an over-the-top endorsement quote from Dyer were featured in Republican campaign materials.

Dyer also endorsed Republican Mike Miller over Democrat Beth Tuura for the Florida House. Representative Miller has an “A” rating with the NRA and refused to vote for the assault weapon ban.

Dyer previously supported Republican Dean Cannon, who was challenged at the time by Democrat Amy Mercado. Mercado lost to Cannon at the time. Cannon had an “A” rating from the NRA and as former Speaker he was influential in pushing Florida’s pro-gun policies over the years. Those policies are why Florida currently has such a gun-friendly environment today.

These are the political games Dyer has played his whole career. Career politicians like Dyer are the worst part of the problem because they know better. They know how to influence or pressure their friends and colleagues. They know policy is what creates long-term change. Yet all they offer are simple words in an attempt to score cheap political points.

Once again, Dyer is simply grandstanding and seeking attention, while his political actions and history expose him as part of the problem.

Save your cheap words, Buddy Dyer. Show us some real actions and change your ways if you want to be taken seriously. And stop supporting pro-gun, pro-NRA Republicans already!