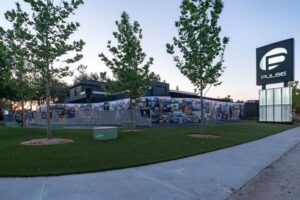 Central Florida Representatives Darren Soto, Val Demings and Stephanie Murphy released the following statements after the passage of H.R. 3094, legislation that designates the Pulse Nightclub as a National Memorial Site. The bill grants a federal designation honoring the 49 lives taken on June 12, 2016 in the terrorist attack, as well as the survivors, first responders and the entire Central Florida community. However, there is currently no Senate companion bill.


“Four years ago, we saw the atrocious and destructive nature of hatred plague our Orlando community when 49 lives were taken and 53 others were injured. As we continue to honor the memory of those lost, I am proud to lead the fight with Congresswomen Val Demings and Stephanie Murphy to designate the National Pulse Memorial. Today, we remind the world that hate will never defeat love, grief can turn into strength and that a place of loss can become a sanctuary of healing. Together, we will continue to open minds and hearts. We will make the Pulse Memorial a national symbol of hope, love and light,” said Rep. Soto.

“We owe it to the families and loved ones of the victims to honor their memories by dedicating a national memorial at Pulse. I’m proud to be co-leading this effort to create a place of healing for survivors and a welcoming place for all those seeking inspiration to create a better, safer, and more inclusive nation. By taking this important step, we are telling the world that we will fight to ensure no community will ever go through something like this again,” said Rep. Murphy.

“Today, I am grateful that the House has passed our legislation to make the Pulse site a national memorial. We will always honor the family, friends, and neighbors we lost that night. Today, the U.S. House moved forward legislation that will help to ensure that the memories of the victims will always be a part of our national identity and that they will never be forgotten,” said Rep. Demings.

One interesting piece of this story is that the Pulse site remains under private ownership despite the House designation. The organization onePULSE plans to build the National Pulse Memorial and Museum that will include the Orlando Health Survivors Walkway – slated to open in 2022 – on the site of the Pulse nightclub and nearby properties.