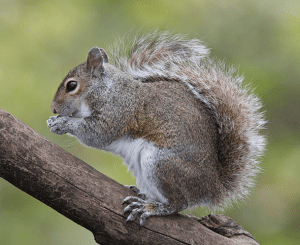 Huffing and puffing during my brisk walk (strolling is apropos), spied a comedic squirrel.

This dwarfish rascal left me in stitches! Noticed that he was trying to gingerly balance, then lift with all of his earthly might, a humongous red apple up to the safety and sanctity of his home which was nestled at the tip-top of an old rugged pine tree.

Was overcome with uncontrollable laughter because this exceedingly large red apple and this pint-sized squirrel were acting as if they were performing a Dosey Doe maneuver in Square Dancing. Then, on the other hand, they also looked as if both had reached a stalemate or was stuck at an impasse and was figuring out who was going to capitulate to whom first.

Respectfully rubbernecking, my stride was now at a snail’s pace as I wondered out loud if this diminutive, yet spirited squirrel, could acrobatically hobble to the tree-top with his prized possession which was obviously destined to become tonight’s dinner.

When my laughter had subsided, wanted a tête-à-tête with this animated squirrel to nosily inquire why he felt a pressing need to “hoard” this foodstuff which was clearly beyond his anthropological capacity. Wanted to discern, from his perspective, what large-scale disastrous event loomed on the horizon which necessitated him to “stockpile” a bounteous apple fit to feed a multitude of his kin folk.

Naturally, desirous in knowing what he had planned to do with the rest of the residuals. Finally, was dying to learn if he had compulsively accumulated other “stuff” and if he had indeed grown excessively attached to those “hoarded” valuables?

Then, the irony was not lost on me…

That squirrel was a composite of yours truly!

Over the span of four decades, I had “hoarded” things under the pretense that I was a quintessential domestic goddess. Thus, from one square inch to another, I had purchased and then attractively arranged and then rearranged “stuff” throughout my house, yard, attic, and then finally the damn garage!

Invited over to dinner?

One would not eat nor drink from the same cup, saucer, plate, fork, bowl, glass, or dessert dish for nearly an entire year as I affectionately “hoarded” china, flatware, and glassware of every design, size, color, name brand, if not country, and appealingly stored them in every nook and cranny!

Overflow of duplicates, and in some cases triplicates of “stuff” ranging from clothing, dishes, furniture, baskets, or miscellaneous whatnots, would be lovingly “tossed” into the garage. Eventually, a two-car garage incrementally became a warehouse for my essential must-have collection!

Later, to remedy the lack of “space” in the garage, I just enlarged the size of the freaking house! Of course, a larger house required me “rescuing” more and more bric-a-brac!

Then I had a clever idea!

Since I couldn’t enlarge the house anymore, why not sponsor several “yard sales?”

However, this “downsizing” activity was only “make believe” and subsequently made additional room to justifiably continue “hoarding” essential must-have collectibles that needed further rescuing!

And, no amount of prodding, cajoling, begging, pleading, reasoning, or even using reverse psychology meted by my husband could separate me from my treasured and unique possessions, which at this juncture, filled my two-car garage to the rafters!

The upcoming purchase of a third vehicle to be utilized by my teenage daughter radically jarred me to my freaking senses. Desperately in need of returning the true functionality of the garage, began to begrudgingly sort and donate my vast and unique must-have collection regardless of its sentimental value, perceived bargain, emotional attachment, intended purpose, or expense!

Was excruciatingly tough to say my final best wishes and goodbyes!

Pouring salt on an opened wound, my BFF, Wesley, comically remarked that I should “throw a big party and invite each guest to take a glass home!”

“Wise guy” nearly made me drop to my knees and cry!

Nevertheless, generalized that my “hoarding” was derived from my traumatic childhood hardships, poverty, and stemmed from a lack of genuine love.

So, upon my father’s death last year, decided to “surrender to the universe” as it pertained to my family’s life-long unresolved and acrimonious drama. Once I terminated that burden, slowly felt no desire to buy “stuff” to compensate for the memories of a deprived, pitiful, and unloved childhood.

Next, focused all of my efforts and attention to spoiling, pampering, appreciating, uplifting, and wholeheartedly loving my “soul mate.” Decided in the final chapter of our lives, wanted his sunrises to always “cha cha” with my “unconditional love.”

Discovered that no “unique must-have collectible” could give me lasting enlightenment and the high-voltage amorousness sensation that I feel when I longingly gaze at my babe. The twinkle of his eyes still mesmerizes me while his handsome smile and laughter easily finds the passageway to my heart strings time after time!

Consequently, my ultimate quest is to zealously “hoard” my soul mate and perpetually take him where he truly and deservingly belongs which is…

Nestled into this marvelous thing called LOVE where he will find the “keys to my heart,” forevermore!