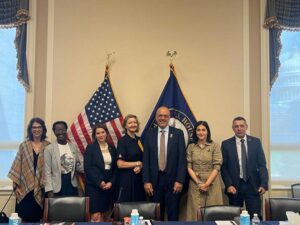 U.S. Representative Ted Deutch, Chair of the House Foreign Affairs Subcommittee on the Middle East, North Africa, and Global Counterterrorism and co-Chair of the Congressional Task Force for American Hostages and Americans Wrongfully Detained Abroad, hosted former U.S. wrongful detainees, families of American hostages and wrongful detainees who died in detention, and families of Americans currently being held abroad for a roundtable discussion to share their experiences and assess current U.S. hostage policy.

“You all, as former wrongful detainees and families of hostages and wrongful detainees, are the most important voices in this conversation. Your experiences, the pain you have been forced to endure, are the single most important takeaway from this discussion today,” Rep. Deutch said to the attendees. “I know all of us, and the future of our nation’s hostage policy, will benefit from hearing your stories, the stories of your loved ones, and your ideas. Your voice, not mine, not my colleagues’, is the most important in figuring out how we can support the families currently living this reality and how we can work together to end this horrible practice and bring every American held abroad home as soon as possible.”

Earlier in the week, as co-Chair of the House Bipartisan Task Force for Combating Antisemitism, Rep. Deutch and co-Chair Representative Chris Smith hosted security experts from the Secure Community Network (SCN), who briefed Members of the Task Force and Congressional staff on threats facing Jewish and other faith-based communities and best practices to identify, report, and combat these threats.

Members of the Task Force were joined by Kerry Sleeper, SCN Special Advisor and Former Assistant Director of the FBI, Dena Weiss, SCN Chief of Staff, and Stuart Frisch, SCN National Training and Exercise Advisor. These experts gave the members a detailed update on threat activity, an overview of SCN’s security work throughout North America’s Jewish community, and a training exercise on situational awareness and countering active threats.


“From Pittsburgh to Poway to Colleyville, we have all seen the consequences of unchecked hate and violence against the Jewish community. There are very real security concerns our religious institutions face, particularly heading into the High Holidays,” said Rep. Ted Deutch. “This week, the Secure Community Network (SCN) reminded those of us on the House Bipartisan Task Force for Combating Antisemitism that every single American has the power to identify suspicious activity and counter violent threats, if we have the right tools. These trainings save lives, and I was glad to host SCN to share their crucial work with my colleagues.”

As a member of the Interparliamentary Task Force to Combat Online Antisemitism, Rep. Deutch also participated in this week’s Interparliamentary Summit Hearing with Members and former Members of Parliaments from the United States, Canada, South Africa, the United Kingdom, and Israel. Witnesses at Friday’s hearing included Ambassadors and Special Envoys To Combat Antisemitism from around the world, including Deborah Lipstadt of the United States, Irwin Cotler of Canada, Fernando Lotteberg of the OAS and Noa Tishby of Israel, as well as representatives from the world’s largest social media companies: Meta, Twitter, YouTube, and TikTok.

“The algorithm is what is driving the images to our phones, and it does: it effectively sends information that the algorithm believes that we want to see,” Rep. Deutch said to the social media company representatives. “So when it is clear that what the algorithm is sending is antisemitic material, violent extremism, racist material, what happens? How does the algorithm change so that it doesn’t just continue to feed the most outrageous antisemitic, for our purposes here today, images and content to the user?”