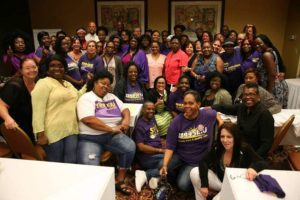 After months of negotiations, Consulate Health Care and caregivers represented by 1199 SEIU United Healthcare Workers East in Florida settled their contract with a significant victory that will increase the minimum wage from $8.05 to $10.40 benefiting over 700 workers. The wage victory will also put a large percentage of the caregivers on a path to earning a living wage of $15 an hour by 2020.

“We wanted everyone in Florida to realize that health care workers are also struggling to make ends meet and fighting for a living wage; we are the people that care for Florida’s loved ones, but we aren’t able to care for our families on our wages and we can’t take it anymore,” said Kim White from Lake Mary Nursing and Rehabilitation Center, a Certified Nursing Assistant and single mother from Orlando.

However, some workers will not get an increase until 2017.

“We are satisfied with the result of the negotiations, even though it did not come without sacrifice; our committee decided to forgo across the board raises for one year to lift the minimum wage to $10.40 and see hundreds of our coworkers get a raise when they need it the most,” said Rochelle Salcedo, from The Palms Rehabilitation and Healthcare Center, a Certified Nursing Assistant and single mom who has been working for nearly a decade and making less than $15 an hour. “A rising tide lifts all boats and this new starting wage sets a new standard in the state of Florida.”

Workers had been advocating for better conditions for both the residents and the employees since last year, and recently more than 1,000 caregivers participated in the largest private healthcare sector strike in the southeast in over a decade. Since then, union membership grew significantly and workers at Heritage Park Rehabilitation and Healthcare in Fort Myers voted to unionize, becoming the 20th Consulate nursing home represented by 1199 SEIU Florida. With this new agreement, hundreds of workers at three Consulate nursing homes in Lee County will have their first union contracts.

“This is an unprecedented victory in an industry that is mostly known for putting profits over people, and we are excited to see that Florida’s caregivers have built a powerful union that can negotiate fair wages with one of the largest nursing home chains in the country,” said Monica Russo, executive vice president of 1199 SEIU Florida. Consulate Healthcare is the sixth-largest long-term care provider in the nation and the largest in Florida and, as usual in the nursing home industry, is mostly funded by tax dollars via Medicaid/Medicare.

“We are committed to fight for living wages everywhere, from our union contracts with for profit companies to our State Capitol, and we will take this fight to the polls in November when thousands of workers will vote to elect a president that agrees that our minimum wage is too low,” added Russo.