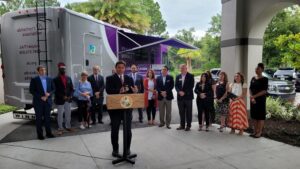 Last week, Governor Ron DeSantis highlighted a more than $12 million increase in Alzheimer’s and dementia funding, bringing Florida’s total commitment to over $51 million for 2021-2022, furthering his strong commitment to the advancement of research needed for this disease. Florida is the only state in the nation that has Alzheimer’s disease and related dementias listed as its own priority within a State Health Improvement Plan.

Approximately 580,000 people are now living with Alzheimer’s disease in Florida and this number is projected to increase to over 720,000 by 2025.


“In Florida, we continue to put our Seniors First,” said Governor Ron DeSantis. “Some of the most difficult health conditions that impact many seniors are Alzheimer’s and dementia and as more innovative early intervention therapies are developed to mitigate the effects and severity of these conditions, awareness of the initial signs and symptoms are increasingly important. Our strong financial commitment of $51 million allows Florida to prioritize the advancement of research and support needed for this disease.”

“Governor DeSantis has ensured Florida is a dementia-caring state,” said DOEA Secretary Richard Prudom. “The Governor brought Florida into the Age-Friendly Network of Livable Communities in 2019, and that means Florida is a dementia-caring state as well. When communities embrace livability for all ages, then all residents benefit from a healthier lifestyle.”

“We are so thrilled to have Governor DeSantis here with us today to recognize Alzheimer’s & Brain Awareness Month,” said Michelle Branham, Vice President of Public Policy for the Alzheimer’s Association. “From adding Alzheimer’s disease and related dementias as a priority within the State Health Improvement Plan to setting forth a bold dementia action plan for his administration, the Governor has continually demonstrated his commitment to supporting Florida’s seniors, and particularly those facing dementia. Governor DeSantis has been instrumental in the efforts to make Florida a more dementia capable state, and we are so grateful to have his support.”

Earlier this month, Governor Ron DeSantis signed a proclamation for Alzheimer’s and Brain Awareness Month in Florida. Alzheimer’s is the most common cause of dementia and the sixth leading cause of death in Florida. In this disease and related conditions, brain cells and nerves responsible for cognition and memories degenerate.

Florida’s Dementia Care and Cure Initiative (DCCI) engages communities across Florida to be more dementia caring and has created 16 DCCI task forces throughout the state. Florida became the first state in the country to offer Project VITAL (Virtual Inclusive Technology for All) dementia-capable tablets throughout the state to seniors living in long-term care facilities and at home living with cognitive impairments and the state’s Alzheimer’s Disease Advisory Committee continues to advance Florida’s infrastructure to address Alzheimer’s disease and related dementias.

Each year, the Florida Department of Health awards grants and fellowships through the Ed and Ethel Moore Alzheimer’s Disease Research Program. This program funds research related to Alzheimer’s disease, improving the health of Floridians by studying the diagnosis and treatment for Alzheimer’s disease.

According to the Centers for Disease Control and Prevention, Alzheimer‘s is among the top 10 leading causes of deaths in the United States. The death rate for the disease has increased significantly in the U.S. over the past few years. More than 122k deaths were reported in the country due to Alzheimer‘s disease in 2018. Highly prevalent among the people with age group of 85 and above, around 5.7 million people are living with Alzheimer‘s Disease in the U.S. The World Health Organization (WHO) added that causing disability majorly among older people, Alzheimer‘s disease contributes to 60-70% of dementia cases, currently amounting to around 50 million cases globally. Around 10 million new cases are recorded every year.  Growing advancements in ever-evolving medical technologies over the years have resulted in remarkable discoveries, further leading to development of effective medicines, treatments and therapies. Alzheimer‘s treatment is one such field where continuous research and clinical trials have led to the development of various effective treatments that are not just limited to discovery of drugs but also cognitive trainings and therapies. On the back of continuous research and advancement in medical science to find potential new treatments and helping patients manage their behavioral symptoms.