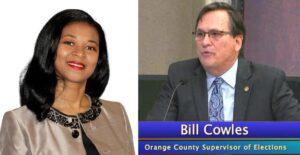 There is an “election integrity crisis” involving Orange County Supervisor of Elections Bill Cowles, a Democrat, after his office reduced the vote total in District 6 late Thursday night and caused an uproar by changing the overall results. The controversial action ended up taking 10 votes away from candidate Cynthia Harris, which flipped the third place candidate, Mike Scott, into second place ahead of Harris by one single vote. Other candidates also lost votes, including Lawanna Gelzer, who placed first in a crowded primary and is definitely going to the runoff.


It also appears the Democratic Supervisor of Elections is claiming the initial vote count was incorrect, due to “someone” in his office improperly feeding ballots into the counting machine more than once, according to reports late Thursday night. This raises serious questions about how Cowles is running elections in Orange County and candidates are claiming there is a “blatant attempt to compromise the integrity of the election results.”

Harris is calling an emergency press conference on Friday, August 26th at 10am at the Orange County Supervisor of Elections office (119 W. Kaley St Orlando, FL 32806) prior to the recount process. “The purpose of this press conference is to expose the blatant attempt to compromise the integrity of the election results of Orange County Commissioner District 6 race,” stated her press release titled “Election Integrity Crisis at Orange County Supervisor of Elections.”

Now this sounds like something Florida Governor Ron DeSantis needs to look into immediately. In a Central Florida county plagued by election integrity issues, this is another black eye in an important election cycle no matter what happens next. Once again, Bill Cowles is at the center.

Witnesses also saw local Democratic Party Chair Wes Hodge arrive with Scott to Cowles’ office on Thursday before the vote totals were changed. Cowles has been active behind the scenes in local Democratic Party politics for years. There was reported biased behavior and preferential treatment as Hodge and Scott arrived at the Supervisor of Elections on Thursday compared to how others, including Harris, were treated. This only raises additional questions and concerns as the election results changed hours later.

All results are still listed as “unofficial results” so it is possible Harris could still end up in the runoff over Scott.

Bill Cowles was recently questioned when three individuals in Orange County were charged with voter fraud. It seems Governor DeSantis’ election integrity may be taking another look into Cowles and what is happening in Orlando politics.

When votes disappear two days after Election Day and late in the night, there are more questions than answers. Cowles is going to have to do a lot better than blaming “someone” in his office for running a random batch of ballots through the counting machines twice in one Orange County race. The fact the vote difference between the second and third place candidates is now only one vote raises serious questions from many who have been following the race.

This is a developing story, stay tuned for more details.