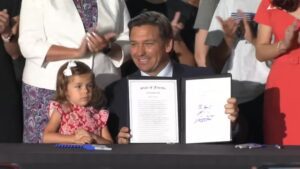 Governor Ron DeSantis signed SB 1028 into law, controversial legislation which will bar any transgender female athletes from participating in girls’ school sports or women’s college sports. SB 1028 makes female athletes’ eligibility for sports teams in Florida contingent on their “biological sex” on birth certificates issued “at or near the time of the student’s birth.”


Critics call the legislation transphobic and harmful, while the Governor says it is about fairness. Even the NCAA said they will “closely monitor” the situation in Florida now, threatening future sports events in the state. Gov. DeSantis is currently calling their bluff.

“It says that athletic teams or sports that are designated for females are open to females, and we’re going to go based off biology, not based off ideology when we’re going sports,” Gov. DeSantis said. “The bill defines a student’s biological sex based on the student’s official birth certificate at the time of birth.”

“Governor Ron DeSantis has signed into law the state’s first anti-LGBTQ bill in 23 years,” Orlando State Representative Anna Eskamani said. “This bigoted, transphobic piece of legislation targets one of the most vulnerable groups of people in our state: transgender youth. It excludes transgender people from public life, including participation in sports. It’s shameful that our Governor and Florida’s Republican Party would attack a group of people who already experience constant discrimination, bullying, and high rates of suicide.”

“Governor Ron DeSantis has yet to meet with transgender youth or the families affected by this dangerous and unnecessary attack,” Equality Florida stated when the legislation was sent to the Governor. They plead for Gov. DeSantis to veto the legislation.

“Republicans in Florida are championing bigoted anti-trans legislation that attacks students who are just trying to live their lives,” the Florida Democratic Party said. The Democratic Party says this is part of a nationwide attack on trans rights by the GOP, despite the fact that bill supporters could not point to any cases of this being a problem in Florida.

“By folding the transgender ban into the charter school legislation, Republicans in Tallahassee rejected both science and reason, openly attacking vulnerable LGBTQ+ children without a single shred of evidence that a problem even exists,” the Senate Democratic Caucus said. “Not once has there been an incident or ocmplaint in our State alleging that a transgender athlete’s participation unfairly impacted middle school, high school or college athletic competition.”

“Florida’s elected leaders could better serve all our youth by understanding and taking action on the high incidences of bullying, violence, and suicidal tendencies that happen to them across this state every day, and trans youth should have no less focus. The language denigrating trans youth incorporated in this bill shows how little the Republican-led legislature regards equal treatment for all our young people.”